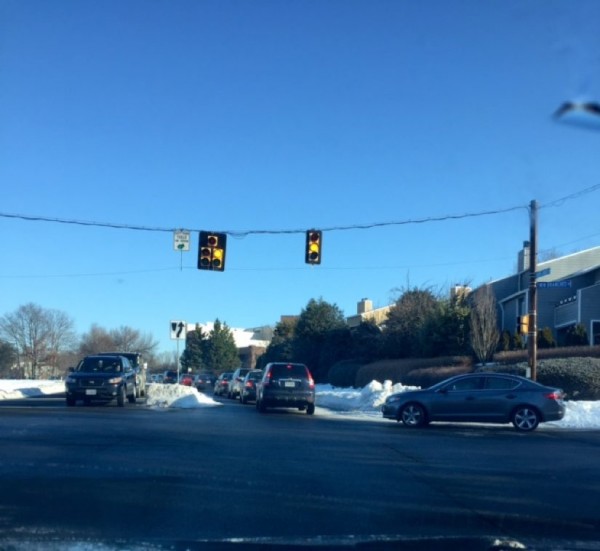 Warmer temperatures have contributed to significant melting of the record snow this week, but one problem still plaguing Reston-area roads is narrow access — two-lane roads are now one-lane roads in many spots.

Snowplow piles and lanes that haven’t been plowed are on many roads, making it slow-going or even dangerous on major streets.

Many Reston Now readers pointed out some of the worst trouble spots on Reston Now’s Facebook page this morning:

There are also some roads in which one side only has half a lane (Twin Branches is one of them, I’m sure there are a lot more), with the the right half of the lane completely blocked by snow mounds. Which means if you’re driving in a full lane, you may pass someone going the opposite way who is literally being forced to straddle the yellow lane. Please, people, show some courtesy and move over to the right as far as you can so everyone can move.

The other bad street for me is Soapstone north of Glade. The plowed part starts on the far left moves to the center then back over the left. This leaves you w/o proper lane markings.

It took me 45 minutes to drive 2 miles in Reston at rush hour last night.

The Virginia Department of Transportation says “crews have worked around-the-clock to make all roads in northern Virginia passable post-blizzard, but there is still some clean-up to do.”

By 3 p.m. Thursday, Sunrise Valley Drive, for instance, had been cleared edge-to-edge, but nearby Soapstone Drive still had people driving in the turn lane.

“Crews are working to widen and restore remaining snow-impacted lanes on primary and high-volume secondary roads,” said VDOT spokeswoman Jennifer McCord. “Clearing efforts will continue through the week, using equipment such as front loaders and motor graders to move snow where plows are unable to push.”

VDOT warns drivers to be aware of lanes that have shifted, narrowed, or are blocked due to snow cover, as well as snow patches or drifts on acceleration and turn lanes.

The agency also urges caution about the giant snow piles left by its plows.

“Be aware that signal timing may be impacted by snow-covered turn lanes,” says VDOT. “Signal engineers are monitoring major intersections and adjusting as needed.”

Residential streets are either VDOT or private cluster association (but not Reston Association). Check this map to see who is responsible for your street.

More Stories
Del. Ken Plum: Progress on TransportationThanks to Our Sponsors and Advertisers