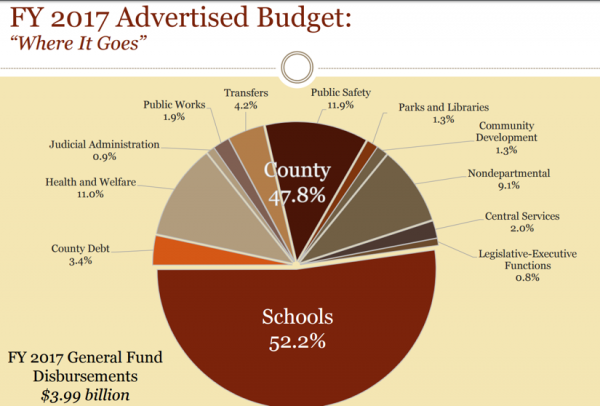 When Fairfax County Executive Ed Long presented his $3.99 billion Fiscal Year 2017 Proposed Budget to the Board of Supervisors last week, one of the main highlights was a $2.08 billion transfer to the school system — which is about $68 million less than what the Fairfax County Public Schools have requested.

To get there — and to meet other county needs — Long is proposing a 4-cent real estate tax increase (per $100 of value), which would represent an increase of about $303 for the average county homeowner. The current tax rate is $1.09 per $100 of value.

If the Board of Supervisors approves Long’s recommendation to increase the tax rate by the full 4 cents, it would be the largest such increase since 2010, when the board approved a 12-cent hike to offset the effects of the 2008 recession.

The supervisors will advertise a tax rate on March 1 (it can be lower than 4 cents), with public hearings in April.

The county will host an online chat with Long on Thursday at 3:30 p.m. You can ask a question in advance on the county’s website.

There are many other specifics in the plan, including millions for county employee raises and infrastructure improvements. Here are a few examples:

A $5.62 million increase in employer contributions to the retirement systems.

Public Safety: Funding of $7.5 million for the first year of a multiyear strategy requiring increased staffing and funding to implement recommendations from the Ad‐Hoc Police Commission, including the Diversion First program, body cameras and independent oversight.

An increase of $3.14 million for the first year of a multiyear strategy to fully fund the opening of a new police station and animal shelter in South County approved by a Public Safety bond referendum in November of 2015.

$5 million for replacement and infrastructure support.

Recreation: Funding in the amount of $7.7 million (A General Fund transfer of $6.1 million and $1.6 million in revenue generated from the the Athletic Services Fee. Over $2 million will go for turf field replacement

$1.9 million for Fairfax County Park Authority maintenance of both facilities and grounds.

$400,000 for emergency and critical maintenance of county trails, sidewalks and pedestrian bridges.

Other: $1 million in costs associated with the 2016 Presidential Election (payment for poll workers, overtime for employees, etc.)

Savings: Fairfax County will save $13.63 million by the implementation of an Employer Group Waiver Plan (EGWP) for Medicare retiree prescription drug coverage. ($10 million) and $3 million in fuel due to lower gas prices, among other areas.

Critical shortages:  “The difference between the FY 2017 Advertised and the FCPS Operating request is almost $68 million,” said Long. “We have not gone as far as we need in investing in infrastructure (facilities and technology). No money has been set aside to provide us flexibility to address economic development opportunities. Other unmet County needs, such as additional public safety staffing, and human service requirements.”