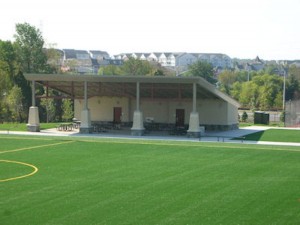 About half that money may come from athletes who will be paying more to use the county’s synthetic turf fields, including those at South Lakes High School, Herndon High School and Lake Fairfax Park.

The county has made the move towards replacing grass fields with turf in the last several years because turf is easier to maintain and provides more hours of usage because they can be used in inclement weather.

Meanwhile, one Reston family has become leaders in the fight to raise awareness of potential health risks of playing on turf. Fairfax County has said the data is inconclusive so it has no current plans to replace the turf.

The county’s Turf Field Replacement Fund provides $1.25 million annually to fund the replacement of 63 non-stadium fields with turf throughout the county ($300,000 is funded from athletic fee revenues and $950,000 from the County’s General Fund), the county says.

But the fund currently remains $1 million below the needed funding levels to sustain the project, the county said.

In his proposed Fiscal Year 2017 Budget, County Executive Ed Long suggested raising player fees, which would result in $500,000 for the turf field fund.

These proposed increases are only for those players and tournament teams utilizing rectangular fields (i.e., not baseball or softball fields).

Long said the rise in fees is necessary to generate the additional funds needed to ensure continued replacement of non-stadium grass fields within the community. Long said $500,000 would be provided by the county’s General Fund while the remaining $500,000 would be generated through the fee increase.

Most turf fields have been installed in Fairfax County in the last five years. However, a Turf Field Task Force Report issued by the county in July of 2013 said the average life span of a turn field is about 10 years, so money must be set aside for replacement.

There will be a public input March 9 with the staff from the Department of Neighborhood and Community Services in order to gather input for the Fairfax County Athletic Council as they consider their position on the proposal.

The meeting is from 7 to 9 p.m. in the Pennino Building, 10th Floor (Virginia Room), 12011 Government Center Parkway, Fairfax.

Long presented his $3.99 billion budget to the Fairfax County Board of Supervisors last week. The budget includes a suggested 4-cent (per $100 of value) real estate tax increase in order to fund some of the county’s greatest needs, including $2 billion for Fairfax County Public Schools.

The supervisors will advertise a tax rate on March 1, and there will be public hearings on the budget in April before it is adopted by the supervisors.

See more details on the FY 2017 Budget in this previous Reston Now post.