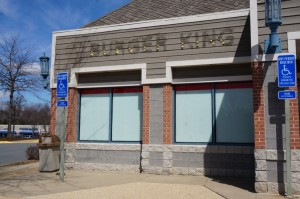 Chick-fil-A plans to tear down the former Burger King building at North Point Village Center in order to make way for a new building to house the restaurant.

Chick-fil-A has filed a Planned Residential Community application with the Fairfax County Planning Commission, which will be heard at the planning commission’s March 16 meeting.

The new PRC plan is necessary so that Chick-fil-A can have a slightly bigger restaurant with an expanded drive-thru, land use attorneys told the Reston Planning and Zoning committee last month.

The Burger King space at 1490 North Point Village Center has been vacant since March of 2014. Chick-fil-A filed its applications with the county in November. Chick-fil-A has an existing location at 12160 Sunset Hills Rd., about 2 1/2 miles away.

John Martinez, Development Manager with Chick-fil-A, Inc., told the Reston P&Z committee the new location will have 96 seats and a children’s play area. There will be outdoor seating for approximately twenty diners, he added.

Martinez also said the North Point location will be a custom project, slightly smaller than is typical for Chick-fil-A because of the size and layout of the site.

There will be 15 dedicated parking spaces at the restaurant, as well as shared parking in the main parking area of the village center, Martinez said.

The new building will be slightly lower (19 feet compared with 21 feet) than the current one, but will contain an additional five feet for standard Chick-fil-A “tower components.”

Two trees will be removed due to configuration of the parking area, but additional landscaping is planned, the Chick-fil-A representatives said.

A county staff report featuring renderings will be made available next week.