Fairfax County Public Schools are planning to add more than 100,000 square feet of space to Herndon High School, which has not been renovated since 1991 and is currently at 107 percent capacity.

The Herndon addition was approved as part of the FCPS Fiscal Year 2017 – 2021 Capital Improvement Program. The CIP reflects $310 million approved by county voters in a 2015 School Bond Referendum. Countywide, FCPS plans $777 million in renovations and expansions to schools.

FCPS is seeking a proffer amendment and will go before the Fairfax County Planning Commission on March 16. 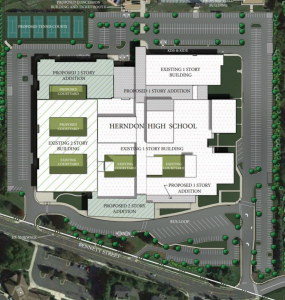 According to a Planning and Zoning Staff Report, the plans for HHS include 138,558 square feet of additions and modifications that will expand the school to 431,000 square feet with a capacity for 2,500 students (from 2,146).

FCPS is also seeking to modify the transitional screening requirements along all lot lines in favor of the existing vegetation and supplemental landscaping and to waive or modify barrier requirements at all borders on the 40-acre site.

To accommodate these additions and renovations, the plan calls for existing tennis courts to be removed and new courts will be created to the north. In addition, some of the adjoining surface parking lots along the northern building perimeter will be removed and replaced with new spaces created along the sides and front of the building.

The front bus loop, parking areas, and landscaped areas will be redesigned as part of the renovation. According to the staff report, the bus loop will be reconfigured for better efficiency and safety. More drop-off, visitor, and staff parking spaces will be created and the amount of turf area will be reduced.

FCPS says several of the mature trees existing along the front of the school will be removed; however, the landscape plan shows a number new trees will be planted in the front area.

There will be modifications to other athletic facilities as well, including:

The staff report recommends approving FCPS’ plans, saying it will increase the school’s capacity, allow it to reflect current district standards and add green building technology and stormwater facilities to the existing school.

South Lakes High School, majorly expanded in 2006, has been approved for a 40,000-square-foot addition. That has recently been the subject of environmental scrutiny, as residents and Reston Association have asked FCPS to better address stormwater runoff in the plans.

The Herndon plans will have to go before the Fairfax County Board of Supervisors for final approval.