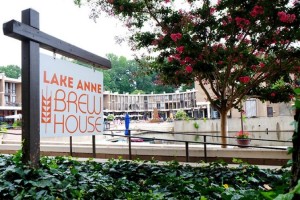 After months of construction and inspections, Lake Anne Brew House — Reston’s first nanobrewery — has an opening date in mind.

Co-owner Melissa Romano wrote on the company’s Facebook page on Tuesday that the brewery had passed its final Fairfax County Department of Health Reviews and is ready to start brewing beer.

“Our inspectors were incredibly complimentary of our space and we are both beaming with pride and simultaneously exhausting huge exhales!,” wrote Romano. “Jason will brew the flagship batches later this week in anticipation of a mid-April opening, so be on the lookout for more posts and photos soon.”

The Romanos purchased the former Singh Thai space at 11424 Washington Plaza W at Lake Anne Plaza nearly a year ago. They have done extensive renovations to the space and patio, but Melissa Romano said in October the permitting process took longer than expected because a nanobrewery is new territory for the county.

Melissa Romano says they will be “working around the clock” to brew and prep.

“We will host soft openings for our Kickstarter contributors before opening to the public, but hope to be serving everyone by mid-April,” she said.

Nanobreweries are a growing segment of the craft beer market that typically produce fewer than three barrels at a time. A barrel is typically 31 gallons or two kegs.

Look for updates on an exact opening date soon.