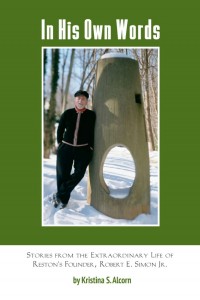 A new book about Reston founder Robert E. Simon Jr. will be released next month, just as Reston is celebrating Founders Day.

Simon died in September at age 101. Founders Day has been expanded to Founders Week (April 3-10) this year in order to accommodate the many tributes to Simon.

The author of the book, titled In His Own Words: Stories from the Extraordinary Life of Reston’s Founder, is Reston native Kristina Alcorn.

The book is a compilation of Bob’s life stories that “draw an intimate and entertaining portrait of the man many knew only from a distance,” Alcorn said.

The book highlights Simon’s humor, adventurous spirit, and dogged determination, Alcorn said. It is illustrated with over 100 photographs and artifacts from his private collection, the archives of Carnegie Hall, and the Reston Historic Trust.

“As a kid growing up in Reston in the 70s, Bob was an icon,” Alcorn said in a statement. “Decades later, when I encountered Bob at local events I would hear bits and pieces of his stories. He was a real life version of the ‘World’s Most Fascinating Man.’ I wanted to hear more and as I did, I knew these tales were too good to only be heard by the lucky few around him. I asked if I could record his stories, and he said ‘yes,’ ”

Alcorn says she spent two years interviewing Simon to record his life stories. She left her job with a government contractor in early 2015 to devote herself full-time to completing this book, her first.

“Not long before he died, Bob asked me if I was going to finish this thing. I assured him I would,” Alcorn said. “And with an absolutely overwhelming amount of support from this community that loved Bob, I have.”

Alcorn will be signing copies of In His Own Words at The Reston Museum at Lake Anne Plaza  from 2 to 4 p.m. on Saturday, April 9. Paperback and limited edition hard cover versions of the book will be available. A portion of the sales will benefit the Reston Museum.

You can preorder the book online.

This event, entitled “A Gift to Bob’s Community,” takes place at the Hyatt Regency Reston at 2 p.m. on Sunday, April 10. Admission is free, but reservations are required. Call the Reston Community Center box office at 703-476-4500 (when prompted, press 3) to register.