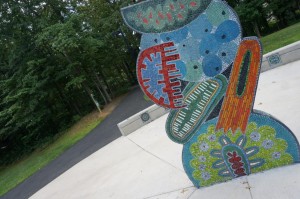 Reston Association Board members will revisit in May the idea of allocating $65,000 this year for public art.

At-Large Director Ken Knueven had made a motion to take the money from the operating cash reserves to support the Initiative for Public Art Reston (IPAR) as it plans its budget for 2017.

There are 18 development projects in the pipeline for Reston, and about half those projects are on land that falls under Reston Association covenants, said Knueven.

Public art also is one of the principles of Reston, and working with IPAR is in the proffers for most developers, he added.

RA will be working with IPAR before the end of 2016 to commission public art for the Pony Barn Recreation site and the new Lake House (formerly Tetra) property, according to Knueven’s motion. In 2017, RA will likely also be planning public art at other RA facilities such as the Central Services Facility, Hook Road Recreation Area, and the Autumnwood Recreation Area, among others.

Knueven said that increasing the donation from RA’s typical $10,000 to $65,000 will go beyond just art. Knueven hinted it could provide leeway for RA to have greater influence on development.

“It allows us to have a louder conversation and a much broader presence in those conversations” with developers, he said.

That did not sit well with several RA Board members, who asked why this could not have been brought up late last year when RA was formulating its 2016 budget.

“Where is the line on how we are going to spend our money?” said At-Large Director Ray Wedell. “We don’t have enough information, and we are trying to buy our way into influence. Reserves should be for emergency situations. You need to prove it to me that we need to spend the money.”

“I am against the whole idea,” she said. “It is irresponsible for us when we have the exposed sewer line, we have kids in school in trailers — and [RA] has $65,000 for public art?”

Added Wedell: “It is not our money. It is the people’s money. It’s not IPAR’s money. I don’t see how we can possibly justify this.”