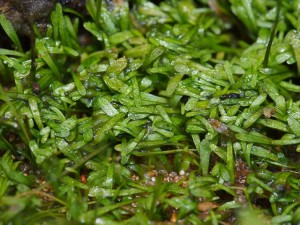 The invader is Bladderwort, and Bill Kirkpatrick of Aquatic Environmental Consultants says its a particularly pesky and unusual aquatic plant that is not typically found in this part of Virginia.

Kirkpatrick is not sure why, but Lake Newport experienced a dramatic growth of the plant last summer. Bladderwort is ecologically beneficial for fish, insects in turtles, but eventually breaks loose and forms dense floating mats on the lake surface.

Kirkpatrick said the plant is typically found in nutrient-poor, boggy, rather acidic areas, which are “places plants can’t thrive.” He said Lake Newport is nutrient-rich, which adds to the mystery.

The environmental consultants thought the stock of grass carp, a fish that feeds on such plants (and has been previously added to Lake Newport to help control Hydrilla) could help control the Bladderwort, but is has not worked.

“We added more grass carp in fall,” he said. “But we are not getting ahead of it. Bladderwort usually dies in winter. It didn’t die this winter and .will start to grow again in spring.”

The new plan for controlling this plant is an aquatic herbicide, which will likely be applied in May. The herbicide will hopefully, kill back the Bladderwort, said Kirkpatrick, with the grass carp eating the remaining plants.

The herbicide is safe for fish and other animals, he added.

“This is an ongoing problem we will have to deal with at Lake Newport,” he said. “It didn’t used to be a problem. But this one particular species is not behaving as it would.”