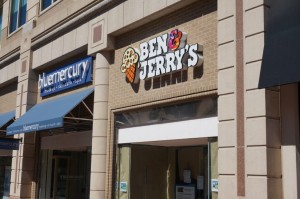 Ben & Jerry’s, which closed at Reston Town Center last fall, is slated to re-open April 30 in its new space at 11916 Market St.

Ben & Jerry’s was formerly located at 11928 Market St. That space has been taken over by clothing store Madewell, which plans to open next week.

Hallock said the new space is being built out and is still being configured to its long-and-narrow shape. He said he plans outdoor seating and limited indoor seating at the new store.