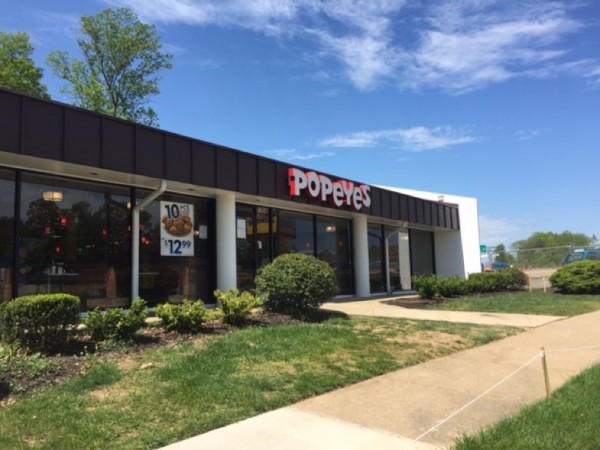 Demolition crews have clear-cut the remaining trees and removed parking lots light poles at what used to be the Reston International Center convenience center.

But one structure remains: the stand-alone Popeyes chicken restaurant.

Several Reston Now readers have asked why: Is this a shining beacon of culinary excellence? That’s subjective. A historical building? Not unless “bland 1970s strip mall” is worth preserving.

It’s a matter of business. When JBG began purchasing and assembling the parcels for redevelopment, the owners of the fast food spot at 11850 Sunrise Valley Dr. simply held out.

A bank, two small strip mall centers and the stand-alone Chili’s building all were purchased as the redevelopment was approved by Fairfax County in 2008.

Meanwhile, the 15-story Reston International Center, once the signature high rise of Reston, is also under different ownership and will stay.

VY will be an extension of Reston Heights, where the Sheraton Reston and Westin Reston Heights are located, along with offices and the Mercer Condos.

JBG says it is “planning active community spaces integrated throughout walkable retail, including a public plaza lined with outdoor dining, a play area and an amphitheater for programmed events.”

“VY at Reston Heights will be an active destination with social public spaces, new living options, and new shopping and dining for all of Reston, ” said JBG Principal Greg Trimmer.

So far, the project has signed one major retail tenant: 24-Hour Fitness.

A JBG spokesman previously said VY is an abbreviation of “very.”