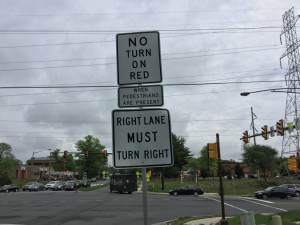 In weeks prior to the special enforcement event, the Street Smart team was on foot around the Wiehle-Reston Metro station. Officers wore bright yellow shirts and handed out educational materials while wearing billboards.

On Wednesday, a large traffic sign was placed near the metro station to alert that special enforcement efforts were taking place. Officers then conducted special, high-visibility enforcement in the areas surrounding multiple pedestrian control devices (e.g. crosswalks and electronic signs).

Police said citations were issued to both pedestrians and motorists.

More Stories
Is the End Near for This Brutalist Building on Sunrise Valley Drive?In the Design Studio: More Kitchen Trends to Watch