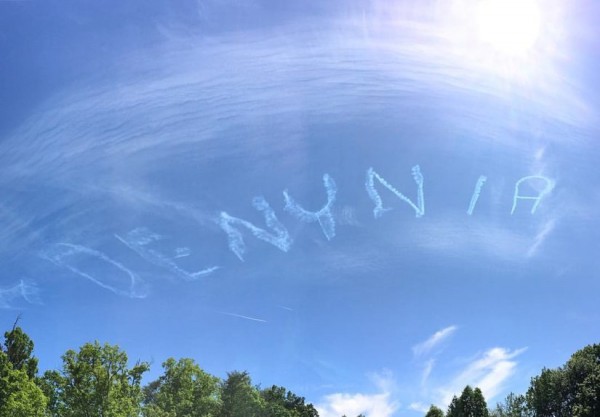 Reston-area workers and residents were puzzled when they looked to the sky about 3 p.m. on Monday. A skywriting plane had left this: “#Deny NIA.”

The reactions on social media ranged from: Who is Denynia? What is happening? Say what?

Here’s what happened. The message was supposed to be a grand gesture to say “#Deny NAI.”

As Reston Now reported yesterday, it is part of a campaign by the Herndon-based Air Line Pilots Association against allowing Norwegian Airlines (NAI) to operate in the United States. 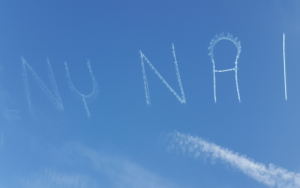 Here is what the ALPA had to say in a statement later on Monday:

“[Monday’s] skywriting was part of ALPA’s campaign to demonstrate opposition to Norwegian’s request for a foreign air carrier permit. While the first pass was a bit jumbled, like Norwegian’s business plan, it is easily corrected. Norwegian should consider doing the same.”

The ALPA says that on April 15, the Department of Transportation (DOT) tentatively approved Norwegian Air International’s (NAI) request for a foreign air carrier permit to allow it to operate flights to the United States.

“NAI’s business plan is designed to avoid Norwegian labor, tax and regulatory laws,” the ALPA says on its website. “It is inconsistent with the intent of the US-EU Air Transport Agreement and, if allowed to be implemented in the trans-Atlantic market, would put U.S. airlines and aviation workers at a tremendous disadvantage as they compete in the international marketplace — two reasons Congress should tell the administration and DOT to #DenyNAI.”

The association got many calls about the typo in the sky, and at about 5 p.m. the skywriting pilot took another pass with the correct message.