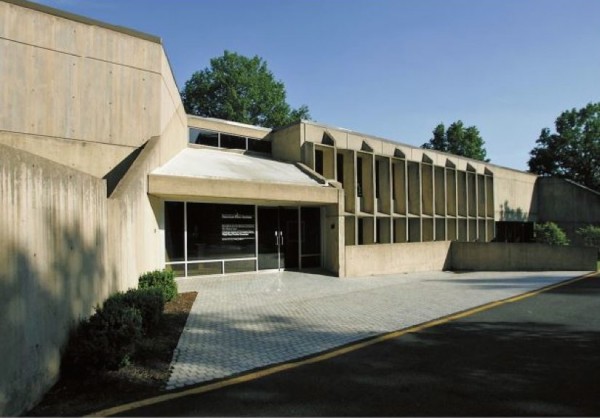 To some, the former American Press Institute headquarters on Sunrise Valley Drive is a vacant office building on a nice wooded lot. To others, it is a shining example of Mid-Century modernism and should possibly be included in the National Register of Historic Places.

Fairfax County and Commonwealth of Virginia Architecture experts have written to Fairfax County Board of Supervisors Chair Sharon Bulova asking for a last-minute reconsideration of Sekas Homes’ rezoning application for the property.

Sekas is looking to rezone the 4.6-acres of land from industrial to residential in order to build 34 townhouses and 10 condominiums at 11690 Sunrise Valley Dr. A county staff report recommends approval of the application.

The Brutalist-style building, designed by noted architect Marcel Breuer housed the API from 1974 until API merged with the Newspaper Association of America in 2012. The building has been vacant since.

In Sekas’ application, it said there were no known heritage resources on the land.

That’s where the architectural experts differ.

“The ARB requests that the Planning Commission and Board of Supervisors request and review adaptive reuse studies to answer some fundamental questions about the building’s feasibility of adaptive reuse, so that informed decisions can be made based on professional analysis,” Fairfax County Architectural Review Board Chair Jason D. Sutphin wrote following a meeting on the subject Tuesday.

Sutphin says the ARB needs to look “at resources throughout the Reston community and that there may be potential historic overlay districts (HOD) in addition to the established HOD at Lake Anne Village Center.”

“It is our opinion that the API building reaches the level of exceptional importance as an outstanding example of Brutalist architecture as designed by internationally known architect Marcel Breuer,” David Edwards of the Virginia Department of Historic Resources wrote to Bulova.

“Breuer’s career spans several decades and his portfolio includes such noted buildings as the Breuer House in New Canaan, Ct.; UNESCO Headquarters in Paris; and the Whitney Museum of American Art in New York City, just to name a few. The API Building is equally significant at state and local levels, and, as our research indicates, the only Breuer building in Virginia.”

“If the API Building were to be demolished, the community and the state would lose the work of a master architect, Edwards’ letter continues. “Additionally, and maybe even more importantly, Reston would lose a building that is part of the community’s distinctive architectural history.”

Edwards recommends the building be renovated for office space or repurposed for residential use. He also says the building has potential for inclusion on the National Register of Historic Places.