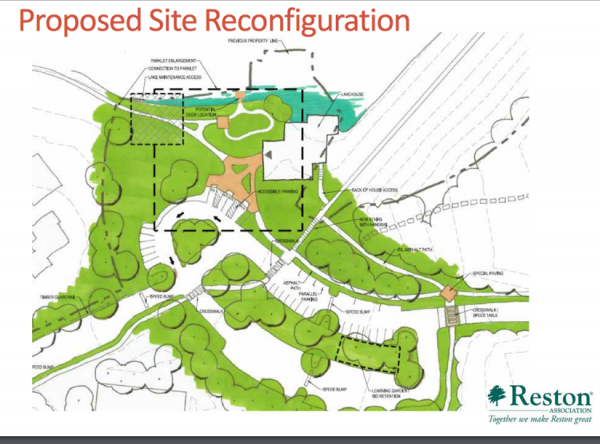 Reston Association’s Lake House project — under scrutiny by the community for the last several weeks after a $430,000 construction overrun was announced — is going to need some major exterior work, too.

The Lake House Working Group showed plans earlier this week for what the outside of the property would, could and should look like — and that includes a dock in Lake Newport; Americans With Disabilities Act modifications to the parking lot; park areas; and a rain garden.

The group says the parking lot closer to the lake (circle) reduction, as well as ADA spaces/grading, drainage and landscaping near cluster should get first priority in the exterior renovation schedule.

But don’t look for that work to be completed any time soon. At this point, the ideas of the working group are a de facto wish list for the exterior.

The original estimate for exterior work at the time of 2015’s member referendum was $9,000 (but that was for the basics such as paint and wood replacement).

With plans for new grounds, expenses for the exterior would be about $1.2 million, some estimates say.

The working group is in charge of giving recommendations about what should be done at the building, which was purchased by RA in July 2015 for $2.65 million.

It will be up to the RA Board to approve where and when the money is spent. First, it has to find the money though.

Some ideas discussed the Lake House Working Group meeting Wednesday included developer proffers; funds raised by Friends of Reston; grants; and from RA assessments (though the group said it felt strongly this option should not be used).

Meanwhile, the interior of the Lake House is finished and will open for its first revenue activities June 27, RA CEO Cate Fulkerson said.

RA says it expects to bring in more than $100,000 annually from camps, after school care (starting this fall) and event rentals.

The board is also looking to convene a group to determine how the overrun occurred and to put procedures in place to ensure an error that large does not happen again. That will be discussed at the June 23 Board meeting.