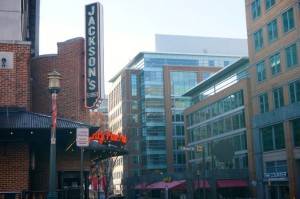 It is about six weeks until paid parking will go into effect at Reston Town Center.

Visitors will have to pay $2 an hour on weekdays — weekends will still be free — and some stores and restaurants say they will validate for at least a few hours of free parking. Still, hundreds of Reston-area residents say they will stay away just on principle.

Many store owners, particularly those who run locally owned businesses, are concerned with what a downturn in customers, combined with validated parking eating into profits, will do to the bottom line.

They should look towards Montgomery County as a cautionary tale.

Last week, downtown Rockville Town Square business owners told Rockville City Council members that parking spaces requiring payment are to blame for their declining sales. Unless something changes, “you’re going to have a lot of boarded up businesses,” the owner of the Ben & Jerry’s franchise said and Bethesda Magazine reported.

Rockville Town Square is a mixed-use destination — retail, as well as an arts center and public library, among others — that charges $2 an hour for parking seven days a week. However, stores validate for two hours of free parking with purchase.

Rockville businesses owners say their sales have fallen as patrons head to RIO Washingtonian Center and Downtown Crown retail developments in Gaithersburg. Both of those offer free parking.

Bob Daly, who owns the franchise of California Tortilla on East Montgomery Avenue, told the council the restaurant earned $1.45 million in sales in 2000, his first year operating the location, and did $900,000 in sales last year while paying a higher rent. Daly said he sold the restaurant and then took it back over in 2014 after paying for a half-million dollar renovation.

“It’s been a disaster for me now and I really regret at this point taking it back over,” Daly said. “I don’t think you guys realize how much we’re suffering here. We’re basically slaves now. We’re stuck in these leases.”

Town Square is owned by Federal Realty, but the garages were built by the City of Rockville.

In February, the council and Mayor Bridge Donnell Newton held a forum that included the business owners and a parking consultant for Federal Realty Investment Trust (FRIT), the developer of Rockville Town Square. The city leased three city-owned garages with a combined 958 total spaces on the property to FRIT in 2011.

FRIT operates the garages with daily paid parking under a 50-year agreement in which it pays the city about $315,000 in annual rent and an additional $50,000 annually in a revenue-sharing formula.

While FRIT does provide free parking for the first two hours if a driver gets the parking ticket validated at a local business, the parking consultant said in February the parking revenue is needed to pay for garage operating costs and the annual rent required by the lease agreement.

He suggested parking enforcement officials carry a yellow card that can be placed on a vehicle’s windshield when its meter is expired.

Last week’s testimony by business owners was the second in recent months. In February, many of the same owners appealed to city leaders.

Rita Gale of the Montgomery County Public Libraries facilities and strategic planning division, said paid parking for a public facility has not been received well

“In their minds, in a suburban environment, the concept is that you have free parking. I think in many peoples’ minds, in an urban setting because there’s public transportation, people are more likely to pay for parking,” Gale said. “But we don’t consider Rockville to be an urban setting. We consider it to be suburban, and that’s part of the reason why people come here expecting free parking.”