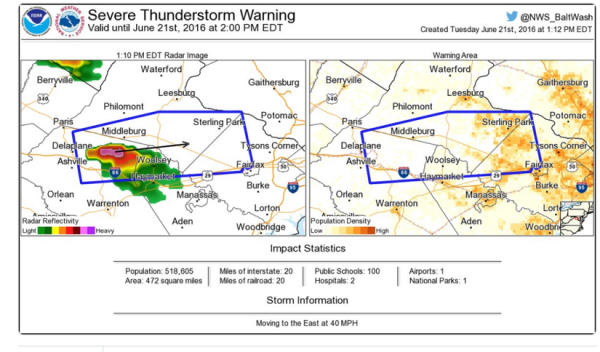 Update, 5:30 p.m.: A Flash Flood Warning has been issued for northwestern Fairfax County until 8 p.m.

Original story: The National Weather Service has issued a Severe Thunderstorm Warning for a swath of Northern Virginia from Middleburg to Reston until 2 p.m. Tuesday.

The rest of Northern Virginia is under a Severe Thunderstorm Watch until 9 p.m. Tuesday.

The NWS says these storms could include damaging hail and high winds. NWS says there could be 80 mph wind gusts and two-inch hail in eastern Loudoun and western Fairfax from 1:30 to 2:30 p.m.