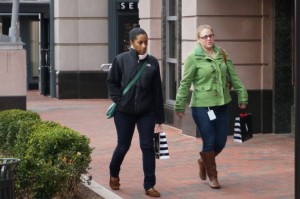 The Washington, DC area comes in second only to New York City in walkability, according to a study by The Center for Real Estate and Urban Analysis at The George Washington University School of Business.

The report even gives Reston a shoutout for creating a walkable suburban area from where there was only farmland years ago.

The study looked at the 60 largest walkable urban areas — WalkUPs to the study authors — and found a trend:

“For perhaps the first time in 60 years, walkable urban places (WalkUPs) in all 30 of the largest metros are gaining market share over their drivable sub-urban competition — and showing substantially higher rental premiums,” says “Foot Traffic Ahead: Ranking Walkable Urbanism in America’s Largest Metros.”

“This research shows that metros with the highest levels of walkable urbanism are also the most educated and wealthy (as measured by GDP per capita) — and, surprisingly, the most socially equitable.”

The authors point out eight types of WalkUp categories — Downtown, Downtown Adjacent, and Innovation Centers among them.

They break down the suburbs as Suburban Town Centers (formerly older small towns that became part of the suburbs), Redeveloped Drivable Suburban (such as Tysons Corner), and finally, Greenfield or Brownfield, where WalkUPs developed on undeveloped land or reclaimed land (such as Reston Town Center, which was once, indeed, a green field).

The study points out that in two of the top-three-ranked walkable urban metros, Boston and Washington, DC, half of the occupied WalkUP space is located in suburban jurisdictions.

The DC area also comes in second to New York in the study’s social equity ranking, meaning “metro areas with the highest walkable urban rankings have the highest social equity performance, as measured by moderate-income household spending on housing and transportation and access to employment. ”

“Moderate-income households in the high-ranked walkable urban metros have (1) the lowest transportation costs due to having less expensive alternatives to evermore-costly cars and trucks, and (2) have greater employment accessibility due to increased density and transit accessibility to these jobs. These two measures balance the higher costs of housing in the most walkable urban metros.”