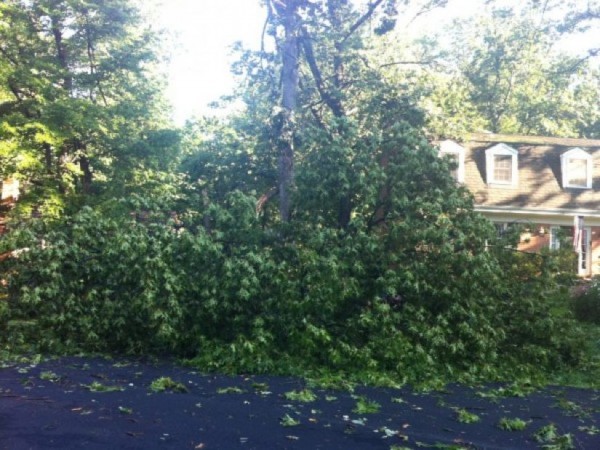 On June 29, 2012, Reston was one of the target spots for a rare and powerful storm that ripped through a swath of Mid-Atlantic states.

The derecho of 2012 came through here that evening, bringing with it winds of 60-80 miles per hour, downed trees, widespread damage and hundreds of people without power for days.

The National Weather Service said at the time derechos hit the Mid-Atlantic about once every four years — so we may be due for another one soon.

But many Restonians had never heard the word before June 29, 2012. They learned it soon after looking at the damage.

The derecho, which affected an area from Ohio to Virginia, started with searing heat (it reached 104 degrees in the DC area that day). Then the hot air moved northward, clashing with a weather front that fell from near Chicago. As both moved towards Northern Virginia, it brought the severe thunderstorms.

Fairfax County officials said they learned from the experiences of June 2012.

“Unlike hurricanes or blizzards, there aren’t days to prepare for something like a derecho. We continue to conduct exercise drills so we’re better prepared.”

What can you do to better prepare for a fast-moving severe storm? Here are some guidelines from the county.

As we officially enter the summer season, which can bring extreme heat and severe thunderstorms, here’s a six-step plan of action to prepare for the next weather event:

“As we arrive at the fourth anniversary of the derecho, we all need to continue to focus on being prepared,” says Roy Shrout, acting coordinator of the Office of Emergency Management.

“Preparedness does not stop with your home, but includes your workplace, school and when you are mobile.”

Meanwhile, the derecho brought out the best in some Reston neighbors. Many people helped each other in the cleanup efforts and shared ice, flashlights, grills and other supplies.

And when the Lake Anne Fellowship House, a subsidized senior citizens facility, experienced a power outage that lasted for days, hundreds of Reston-area residents brought food, drinks and other supplies to the residents.