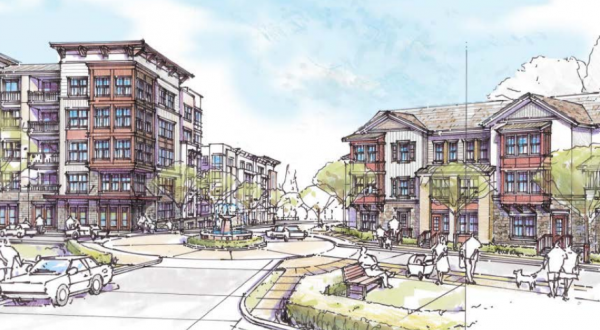 After nearly two years of tweaking plans for redevelopment, The Bozzuto Group may be ready to move forward with plans to nearly double the size of St. Johns Wood Apartments near North Point Village Center.

The latest plan is for Bozzuto to redevelop the 250-unit garden apartment complex into 511 multi-family units and 51 townhomes.

That’s actually a scaled-down and lower-rise version from the first plans that were shown to community members more than a year ago.

But based on meetings with Fairfax County, the Reston Association Design Review Board, and members of the Reston Planning & Zoning Committee, the developer revised the plan to reduce the scale and scope of the multi-family residential buildings.

Bozzuto eliminated one of the previously proposed multi-family buildings, adjusted the massing of the two remaining residential buildings to improve their compatibility with surrounding uses, and is making an effort to preserve more wooded area on the property.

Some of the other details:

An additional traffic entrance/exit from the community located at Reston Parkway and Center Harbor Road. An exit on Center Harbor has been added to the current one at North Village Road.

Twelve percent of the units will be set aside for affordable housing, as required by law.

The complex will include a fenced dog run and pocket park.

The developers expect the planning phase, once the proposal is approved by the Fairfax County Board of Supervisors, will take about two years and construction another two years. No word yet on what would happen to current residents during redevelopment.

There have been community concerns about a development of this size — and the increase in residents and traffic — as it is more than a mile from the Reston Town Center Metro station. That station is slated to open in 2020.

See more of the plan, including landscaping, tree preservation, a traffic study and pedestrian access on Reston Association’s website.