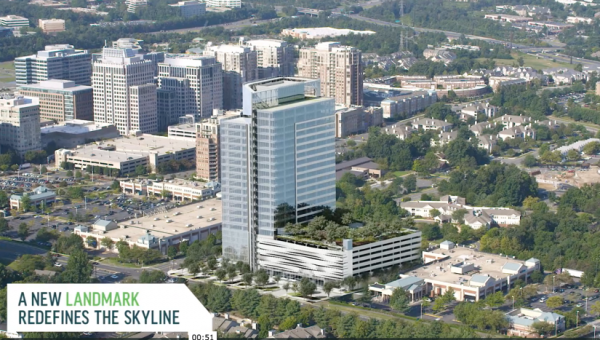 One address above it all… One Reston Town Center is poised to become and iconic landmark that will redefine the office market in the Washington, DC region.

Leveraging its pivotal location within Reston Town Center, the glass tower will be the tallest structure for miles, offering stunning panoramic views extending from downtown Washington, DC to the Blue Ridge Mountains. The building will feature a remarkable six-story glass enclosed atrium lobby, a 30,000 square-foot landscaped, outdoor plaza on the seventh floor, and an impressive rooftop lounge and terrace that complement sophisticated design elements and flexible floor plans.

Akridge will develop the expansive 23-story, 420,000 square-foot trophy office tower. The extraordinary potential of the building’s location, unparalleled amenities, and powerful presence sets apart One Reston Town Center as one address above it all.

The building will also feature 15,000 square feet of retail space, eight high speed elevators and a parking ratio of three spaces per 1,000 square feet in its six-level garage. Additionally, the website says the building will have a state-of-the-art fitness facility; private landscaped terraces on the 7th floor, 22nd floor, and the rooftop; and a three-quarter acre landscaped plaza with cyber cafe.

There is reason for the heavy marketing: Akridge has previously said it would not start construction until a major tenant has been signed. So the developer is actively looking for that signature tenant.

In June, the Fairfax County Board of Supervisors unanimously approved changes that made changes to terraces, garage and the entry atrium for the future tower that will be 115 feet higher than any other Reston building.

One Reston Town Center will replace a five-story office building.

The $210 million building was controversial when it was first approved by the supervisors in 2012 because of its size, height and distance of nearly a mile from the future Reston Town Center Metro Station (slated to open in 2020).