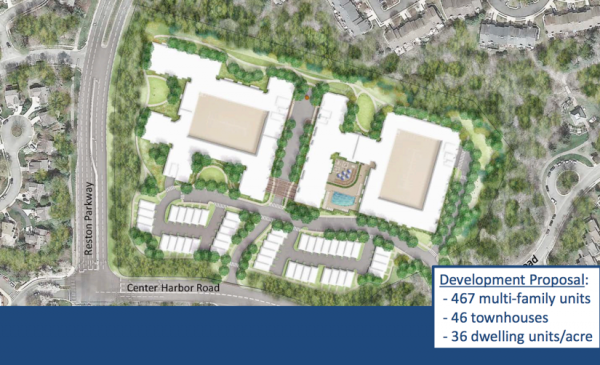 North Point-area residents packed a Reston Association meeting room Thursday to point out a long list of issues they have with plans to redevelop St. Johns Wood apartments.

Project developer Bozzuto has made several changes to its redevelopment plan for the 14-acre garden apartment complex over the last two years. The newest one calls for turning 250 units in nine garden-style buildings into 467 units and 46 townhouses.

It’s still too much for a quiet, suburban-style residential neighborhood, residents said Thursday. They said the plan looked like “Inova Fairfax Hospital,” or a “VCU college dorm with a facade like the Mosaic District.”

Bozzuto reps say the complex at Reston Parkway, North Village Road and Center Harbor Road was identified for high density as far back as when Reston was first planned in 1964. The idea was to have critical mass around Reston’s village centers, said Hunter Mill Supervisor Cathy Hudgins.

“Basically, it has been underdeveloped,” Hudgins told the crowd. “The only place you will see density [growth] is near the village centers.”

However, the Reston Master Plan update in 2014 brought down the density allowances farther from the Metro. That’s why Bozzuto reworked St. Johns Wood, which is more than a mile from the future Reston Town Center station, from 46 dwelling units  per acre to 39 units per acre and now 36 units per acre.

The developer also has changed the facades of the townhouse to have cleaner lines and has scaled the buildings from six stories to five to rise no higher than the current tree line.

That’s still to much change for the character of the neighborhood, says Susanne Andersson-Tosado, who has organized a petition protesting the plan.

“This design is not in compliance with the [Reston] Master Plan,” she said. “The Master Plan says buildings should fit in to the natural area and character of the surrounding areas. This is clearly not in line with that.”

“We have to go back to the drawing board,” she said. “This does not fit the criteria. ”

Traffic and parking also concern residents. The Virginia Department of Transportation says Bozzuto cannot build an entrance to the development from Reston Parkway because that would have too much impact on a major road. So entrances and exits would be on Center Harbor and from North Village Road.

Andersson-Toasado and several other speakers pointed out that North Village runs through Browns Chapel Park and has a speed limit of 10 miles per hour, which makes it a terrible access road for a development of this size.

Attorney Brian Winterhalter, representing Bozzuto, said density is needed to support Reston’s village centers. He mentioned the demise of Tall Oaks, which sits mainly empty and will soon be redeveloped into a mostly residential neighborhood. He said that village center’s demise was partly due to not enough residents to shop there.

Stephen Canner, a North Point-area resident, said that is a poor comparison.

“The North Point Giant is thriving,” he said. “They don’t need any more support. This project does not belong in our neighborhood. Find another place.”

While the project is scheduled to go before the Fairfax Planning Commission on Sept. 29, that hearing is likely to be postponed until at least October, Winterhalter said.

Meanwhile, Reston Association says it will review comments from Thursday’s meeting into a “comments document,” which will be sent to the developer, Reston Planning & Zoning Committee, the Fairfax County Department of Planning & Zoning and the RA Design Review Board.

See the presentation featuring new information from Bozzuto in the document below.