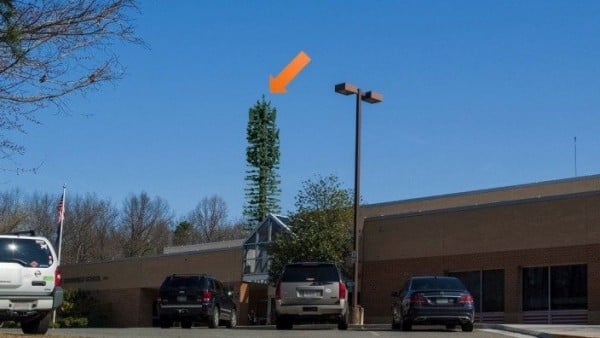 Updated: The public hearing has been moved to Sept. 28 (it was originally reported to be Sept. 15

The plan to build a cell phone tower disguised as a tree at Crossfield Elementary School in Oak Hill will go before the Fairfax County Planning Commission in September.

Verizon Wireless is seeking to build the tower at the Fairfax County Public Schools’ elementary school at 2791 Fox Mill Rd. on the Reston/Oak Hill line in order to improve cell phone coverage in the area.

Verizon is working with local firm Milestone Communications to get approval to build the 138-foot tower and improve cell phone reception in the area.

The request to build the pole comes about three years after a similar proposal fell apart in the application process. T-Mobile and Milestone filed an application in November of 2013 seeking to build at Crossfield. The request was postponed indefinitely.

There is organized opposition to the construction, just as there was in 2013. A group of residents has organized an online petition.

The cell tower proposed for Crossfield Elementary is not needed — a ‘significant gap in coverage’ does not exist in this area, as defined by Federal requirements. Eighty-two (82) towers are active within a 4-mile radius of the site – and the poor cell reception within the school and in nearby homes can be fixed with inexpensive signal boosters.

Cell towers near elementary schools concern home shoppers enough to lower property values, and they are an eyesore even when disguised as “trees.”

In addition, there is enough scientific uncertainty about the health risk cellular radiation poses to small children that we must protect these kids rather than ignore the evidence and be sorry later. This school has 3- and 4-year-old preschoolers who could be exposed daily to this radiation for nine years. No studies to date have been done on children to measure the effect of long-term exposure to non-ionizing radiation (the type emitted by cellular towers).

The World Health Organization cautions to avoid exposure to non-ionizing radiation as a cancer prevention strategy. We must be proactive in protecting our families, financially and physically, by eliminating this unnecessary risk.

Find a different place to put this tower! We, the local residents and school parents, DO NOT want it.

The neighbors have also sent letters to school and county officials.

There was also a proposal by AT&T and Milestone for a pole at Hunters Woods Park, a Reston Association property, in June of 2014. The RA Design Review Board nixed the ideaof a 115-foot pole in the woods behind a soccer field.