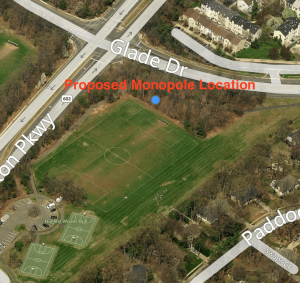 The tower would have been the first such structure on RA land, though there have been requests to do so before. One of those requests was dropped by the carrier; the other was also denied by the DRB.

Reston-based Milestone Communications and AT&T sought to install a monopole in the wooded area behind the soccer field at the park off of Reston Parkway. The equipment would be located in a fenced-in area of the park and would include cables and other support structures.

The DRB concurred with several community members that spoke of their concerns with the environment, property values and damage to trees, among others, at Tuesday’s meeting.

The cell phone tower would have been a moneymaker for Reston Association. The cell phone companies pay the landowners to lease the pole space. FCPS, for instance, has made more than $4 million from the arrangement over the last six years, FCPS officials said.