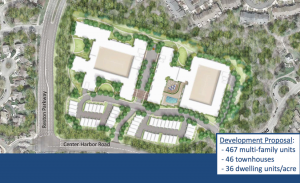 The plan to re-develop St. Johns Wood Apartments will get at least an additional month before its Fairfax County Planning Commission public hearing.

Developer Bozzuto is now on the planning commission’s schedule for Oct. 26.. Most recently it had been scheduled for a hearing on Sept. 29.

The plan to more than double the size of the garden-style development at Reston Parkway and Center Harbor Drive has been on and off the county agenda for more than two years. It has also been reworked several times.

The postponement gives Bozzuto more time to make changes, since the current tweaks are not well-received by area residents, who have spoken up at two recent community meetings.

Bozzuto’s latest plan for the 14-acre space is to turn the 250 units in nine garden-style buildings into 467 units and 46 townhouses. They will be rental units.

The latest plan was called many things — none of them very affirmative — at the Aug. 4 meeting organized by Bozzuto and the Hunter Mill Supervisors’ office. They said the plan looked like “Inova Fairfax Hospital,” or a “VCU college dorm with a facade like the Mosaic District.”

Many community members also attended Aug. 9’s RA Board Governance Committee, where they further expressed anger about the planned development.

“I’ve been here 29 years,” Turnbridge Cluster resident Mike Kenworthy said to the committee. “I had the understanding Reston had a master plan. … We are becoming the town center and that is unacceptable.”

Bozzuto reps say the complex at Reston Parkway, North Village Road and Center Harbor Road was identified for high density as far back as when Reston was first planned in 1964. The idea was to have critical mass around Reston’s village centers, said Hunter Mill Supervisor Cathy Hudgins. St. Johns Wood is in a wooded, residential area across from North Point Village Center.

But St. Johns Wood is also more than a mile from the future Reston Town Center Metro station. After the Reston Master Plan update in 2014 brought down the density allowances farther from the Metro, Bozzuto reworked St. Johns Wood.

Bozzuto recently scaled down the buildings to five stories that will rise no higher than the current tree line. That’s still to much change for the character of the neighborhood, says Susanne Andersson-Tosado, who has organized a petition protesting the plan.

Among other resident concerns: Traffic and parking. Residents have voiced concern about entrances and exits that would be on Center Harbor Road and also from North Village Road, which is a 10 mph passage through Brown’s Chapel Park.

RA Board members say they understand the residents’ frustrations — and also agree the development is too large and out-of-place — but RA is not responsible for approval of Bozzuto’s plan. That falls to Fairfax County’s Planning Commission, and ultimately, the Board of Supervisors.

“We can influence and irritate,” said At-Large Director Eve Thompson. “But we cannot stop anything. I am concerned that there is this perception that we have the ability to stop development.”

At-Large Director Ray Wedell made an impassioned, almost angry, speech on the subject at a special board meeting on Tuesday. Other board members said they were concerned Wedell was misrepresenting RA’s ability to affect change in this case.

“Ten years from now, I don’t want to see a monstrosity and know that I promoted it,” Wedell said. “That is going to be an eyesore –more traffic, less affordable housing. This is a call for RA to step up and defend the community’s rights. Are we going to stand with the members or not with the members?”