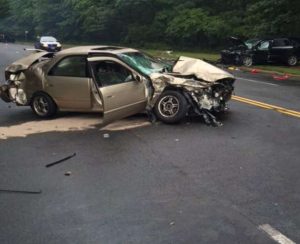 After a car crash with injuries on Wiehle Avenue earlier this week, many Reston Now readers chimed in that “something needs to be done” about the stretch of Wiehle from Baron Cameron Avenue to Sunset Hills Road.

The road is on a hill in that section and features a slight blind curve. Monday’s crash occurred at Wiehle and Inlet Court. That intersection was the site of nine crashes in 2015, according to Fairfax County Police. It was the second crash at the intersection in 2016.

A pedestrian was hit and killed by a driver at Wiehle and Chestnut Grove last October, one of three car-vs.-pedestrian incidents in 2015, records show. The woman killed in that crash was crossing Wiehle at dawn outside of a crosswalk.

FCPD points to several intersections as trouble spots on Wiehle. Since the start of 2015, there have been 20 collisions at Wiehle and North Shore Drive. The busy intersection at Baron Cameron has had 17 crashes in that time frame.

There have been 12 crashes at the intersection at Sunset Hills since the start of 2015, FCPD records show. That area continues to be a trouble spot, with the W&OD Trail also crossing Wiehle there. Access to the Silver Line station at Wiehle-Reston East and egress from Fairfax County Fire Rescue Station 25 also complicate things at that intersection.

The Fairfax County Department of Transportation plans a pedestrian bridge to take the W&OD over Wiehle. The $10 million bridge likely won’t be built until 2021, however.

Meanwhile, while it seems Wiehle is an increasingly dangerous road, FCPD spokesman Officer Don Gotthardt points out that incidents are actually down in 2016.

There were 53 collisions on Wiehle in 2015. With a little over three months left to go in 2016, there have been 25 recorded by police. Gotthardt said the reasons for the decline were unknown.

Overall, there have been 78 collisions recorded since the start of 2015, though, which does it make Wiehle a trouble spot. What do you think should be done to make it safer? Tell us in the comments below.

Also, check out the document from Fairfax County Police mapping and categorizing what has happened on Wiehle in the last 20 months.

Collisions on Wiehle Avenue by Karen Goldberg Goff on Scribd