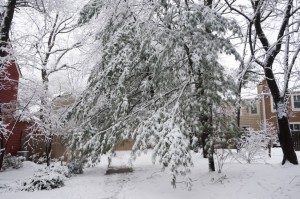 To put Reston’s holiday weather forecast in musical terms, the chances are pretty low for a “white Christmas” this year, but hopefully the day will turn out “merry and [at least somewhat] bright.”

Temperatures likely will reach the upper 40s Sunday in Reston, with some peeks of the sun, according to Weather.com.

Christmas Eve is more likely to be wet, though, with a 40 percent chance of rain in the morning. But with the high and low temperatures expected to stay above freezing (47 and 36 degrees, respectively), rain probably won’t turn to freezing rain or snow. The chance of precipitation goes down to only around 10 percent by Christmas morning.

During the past 25 years, the chances of Northern Virginia seeing a white Christmas on any given year have stayed around 25 percent, according to the National Oceanic and Atmospheric Administration. In fact, the only areas of the U.S. where chances are 50 percent or above are in “the mountainous West, northern New England and the far northern tier,” NOAA says.

Reston and the greater D.C. area have had a white Christmas less than 10 times in the past 127 years, according to Reston Patch and DCist. Snow was last on the ground on Christmas in 2009, after the “Snowpocalypse” hit the area.