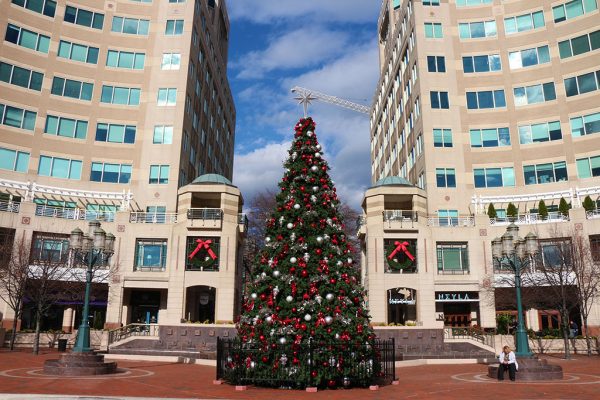 Driver Hits, Injures Woman and Two Kids in Herndon — A motorist crashed into a woman and her two children in Herndon yesterday evening. The collision happened near the intersection of Centreville Road and McNair Farms Drive around 3:22 p.m. yesterday. The woman and her kids all sustained non-life-threatening injuries. [WJLA]

Reston Station Development Gets Top Floor — The OB1 office tower going up at Reston Station has finally topped out at the 16th floor. The structural engineers at Thornton Tomasetti posted photos of the progress on its blog this week. Once complete, the building will have space for offices, a restaurant and eight floors of below-ground parking, right next to the Metro stop. [Thorton Tomasetti]

Record Number of Degrees and Certificates Earned in 2016 in Virginia — According to the State Council of Higher Education for Virginia, Virginians earned the largest number of higher-education degrees and certificates Virginia institutions this year than in any other period in history. That’s 49,726 from public institutions plus 7,179 from private institutions, for an increase of nearly 4 percent over last year. [Greater Reston Chamber of Commerce]

How Reston Compares to Rest of Virginia in Commute Time — The U.S. Census Bureau’s latest American Community Survey examines the average commute length of areas across the country. Reston Patch took the 76 areas of Virginia the survey reported on and ranked them from best to worst. Are you surprised that both Herndon and Reston ranked in the top 10 best, with averages of only 25 to 29 minutes? Nearby Dulles ranked in the bottom third with 37 minutes. [Reston Patch]