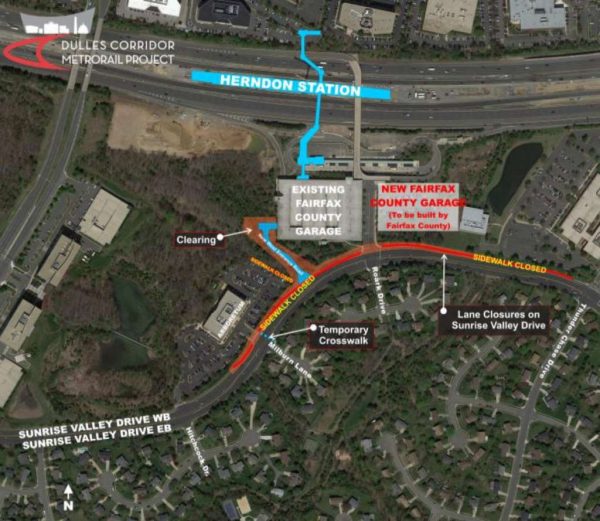 Work will soon begin on Sunrise Valley Drive to widen westbound lanes, as part of the Dulles Corridor Metrorail Project.

The construction effort was scheduled to begin Monday. But Marcia McAllister, spokesperson for the project, said Mother Nature had other plans.

“It’s just too cold” for work to start as planned, McAllister said. She said they envision getting workers on the ground later this week.

Roadway improvements near the Herndon-Monroe Park and Ride will require the closing of Sunrise Valley Drive westbound lanes between 9:30 a.m. and 3 p.m. each day; as well as the closure of the sidewalk on the north side of the street, between the Arboretum and Thunder Chase Drive.

“We don’t yet have specific dates for all the lane closures and sidewalk closures, because it’s an unfolding process,” McAllister said. “We’ll be sending out frequent alerts to tell people in the neighborhood and the general public.”

Once it gets underway, the work will include the clearing of trees along the street, the installation of erosion and sediment controls, utility relocations, and the construction of a new entrance road to the existing parking garage. Work on this project is expected to continue through the end of 2018.

“There will be times when the work is more intense and other times when it’s not,” McAllister said. “We wanted to give the public a general idea of how much work is going to be done there.”

Ground was broken in November on a new parking garage for the Herndon Metro Station. That project is under the guidance of Fairfax County.

“With what we’re going to be adding in that area… it’s necessary that we do some improvements to Sunrise Valley, to improve the access to the station,” McAllister said.

The future Herndon Metro Silver Line Station will serve riders at ground level in the median on the Dulles Toll Road and will serve the existing Herndon-Monroe Park and Ride, with access from both sides of the road. Phase 1 of construction on the Metro station is already underway, and Phase 2 is expected to wind up at some point in the next five years, according to Metro officials.