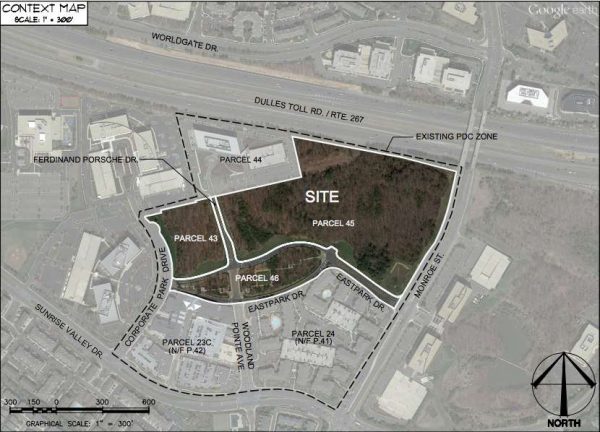 Concerns over the ties between real estate company Tishman Speyer and an anti-Muslim hate group dominated discussion during a recent public hearing about property development near the Herndon Metro.

Those concerns now appear to be a thing of the past, however, as the company has ended its business with The Clarion Project. The decision came last week following pressure from the interfaith community, some of which was seen during the Woodland Park hearing.

Tishman Speyer owns the property, located to the west of Monroe Street and south of the Dulles Toll Road, that is up for discussion. It also leased D.C. office space to The Clarion Project, a group that has created and distributed a number of anti-Muslim films and other materials, until it severed the contract last week.

The Clarion Project is classified as a hate group by the Southern Poverty Law Center.

Speakers at the Jan. 11 public hearing included Colin Christopher, the deputy director of government affairs for Dar Al-Hijrah Islamic Center in Falls Church. Christopher said his mosque wanted the planning commission to delay the vote and take a stand against Tishman Speyer, who he said had to that point refused to address its relationship with The Clarion Project.

“If you don’t think this is a big deal, I’d like you to imagine hundreds of people and faith leaders — maybe from your church or synagogue or mosque — at the next meeting, standing in front of the bulldozers with the local news documenting what’s going on,” Christopher said. “We have that power and we will use it if we have to.”

Christopher said Islamophobia is gaining momentum in the United States and it is the responsibility of citizens and government officials to fight it. His words were echoed by Jeanne Trabulsi, a teacher from Arlington who followed him to the podium.

“Tishman Speyer has chosen to ignore clergy and other citizens who have reached out and who are concerned that allowing a hate group to exist and function in our midst is corrosive to our sense of well-being and to the well-being of others,” she said. “I ask that the board postpone approval of this project until Tishman Speyer becomes a good global citizen.”

Alison Glick, of the DC-Metro chapter of Jewish Voice for Peace, also addressed the commission in support of the Muslim community. She said her group had protested at the Pennsylvania Avenue office building in December and 30 interfaith clergy had sent a letter to Tishman Speyer asking them to evict The Clarion Project.

“We want you to know that we understand how important this development project is,” Glick told the planning commission about the Woodland Park Parcel. “But the relationship that we have with the Muslim community… is also important.”

On Jan. 17, the Jewish Voice for Peace said the testimony at the Woodland Park Parcel public hearing was what forced Tishman Speyer’s hand to make its decision regarding The Clarion Group.

“The turning point in the campaign came when JVP DC-Metro partnered with leaders from the Dar Al-Hijrah Islamic Center in Falls Church, Virginia. The Islamic and Jewish organizations collaborated to challenge a major Tishman Speyer development project that was before the Fairfax County Planning Commission. Last week, the Commission was set to unanimously approve the project, until representatives from Dar Al-Hijrah and JVP testified about Tishman Speyer’s ties to the Clarion Project.”

All commissioners who voted on the project did recommend it for approval, but two commissioners — Karen Keys-Gamarra (Sully) and Janyce Hedetniemi (At-Large) — decided to abstain because of the testimony. Commissioner Frank de la Fe, of the Hunter Mill District, explained that what the speakers was asking was outside the purview of the commission.

“I sympathize and empathize with what I heard. Our nation is going through what I would call some difficult times,” de la Fe said. “But we are here to make land use decisions based on what is good for the county as far as the land use process. I think this application meets those requirements.”

The Board of Supervisors is expected to hold a hearing on the project Tuesday, Feb. 28 at 3:30 p.m.

More Stories
High Winds in Area Expected to Continue Into Monday EveningChief: ‘These Suspects Attempted to Murder a Police Officer’