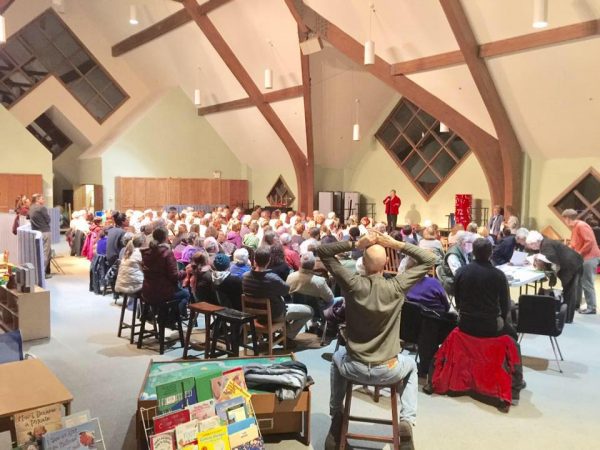 Amid a political climate growing more divided by the day, a local group looking to stand up for what they believe is reporting big growth.

According to information provided by Herndon-Reston Indivisible, about 300 people attended a meeting the group held Thursday night at Sunset Hills Montessori. Eileen Minarik, the school’s founder and owner, offered up the space.

“People are not just coming to meetings — they’re doing things,” Minarik said. “It’s been really gratifying to see the number of people who are out here, not to be anti-someone, but to be pro-social justice.”

The group is following the suggestions of the Indivisible Guide, developed by former congressional staffers as “a practical guide for resisting the Trump agenda.” Hundreds of such groups have formed across the nation, including more than 150 within a 100-mile radius of Reston.

Members of the group participated in the Women’s March on Washington earlier this month, as well as in a protest Sunday outside the White House. Now, as protests regarding President Donald Trump’s executive order on immigration continue at nearby Washington Dulles International Airport, members of the group’s base have taken part.

The executive order has prompted outrage from a number of the area’s representatives on Capitol Hill, including Rep. Gerry Connolly (D-Va.), who addressed protesters at the airport this weekend.

The Herndon-Reston group is also asking members to call Senate Minority Leader Chuck Schumer (D-N.Y.) and Democratic Virginia Sens. Tim Kaine and Mark Warner to urge them to “publicly oppose and filibuster” any Trump nominee to the Supreme Court.

In the 2016 General Election, Democratic candidate Hillary Clinton took about two-thirds of the vote in Virginia’s 11th Congressional District, which includes Herndon and Reston.

Minarik said Herndon-Reston Indivisible’s meeting last week was its second, and the turnout was about twice as large as for the first. The group’s next meeting is scheduled for Tuesday, Feb. 21, at 6:30 p.m. at Sunset Hills Montessori (11180 Ridge Heights Road).