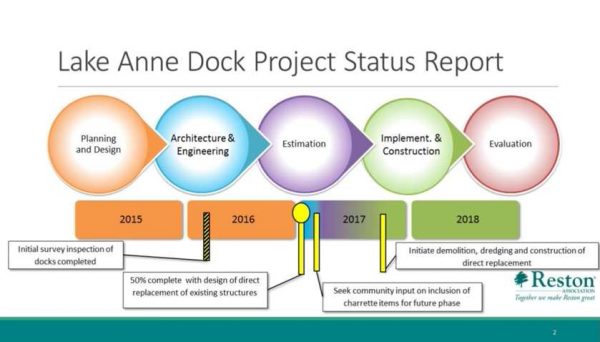 (This article was edited on Jan. 31 at 1:45 p.m. to better contextualize a statement made by CEO Cate Fulkerson.)

No public hearing on the proposed Lake Anne dock project was agreed upon by Reston Association Board of Directors at its meeting last week, following spirited discussion about the plan.

Bridget Hill of the Fairfax County Office of Community Revitalization addressed the board with a number of ideas for the future of the Lake Anne Village Center, which were the results of a 2015 community charrette. Ideas ranged from enhanced lighting and concrete pavers to the addition of kiosks or even a floating restaurant.

Garrett Skinner, RA’s new director for capital improvements, made his suggestion to the board — to proceed with a direct replacement of the dock and set a public hearing for community input on the future phase of the project.

Multiple board members took umbrage with the second part of that recommendation. Director Lucinda Shannon said she could not understand why discussion of another potential capital improvement plan would be scheduled while others have already been placed on hold.

“Let’s take care of what we already have, and not keep adding more,” Shannon said.

Shannon was referring to the Pony Barn and Central Services projects, which are both on hold until the review of the Lake House project is complete.

CEO Cate Fulkerson said the board was approached by representatives of the Lake Anne Merchants Association and Lake Anne of Reston Condominium Association regarding the project.

“We wanted to make sure the board had an opportunity to learn about the charrette and have a public input session before you decided what you wanted to do,” she said. “We’re going to move ahead with the other piece, because it’s really important to maintain what we have, but this was a community request.”

Direct replacement of the existing dock, which RA Parks and Recreation Director Larry Butler said has had no major refurbishment in about 20 years, is scheduled to cost about $400,000. Those funds have already been allocated. Additional changes would require review by RA’s Design Review Board and Fairfax County’s Architectural Review Board, which considers changes to Historic Overlay Districts such as Lake Anne Plaza.

When Eve Thompson, the board’s secretary, joined the conversation, Shannon cut her off by saying she has a “serious conflict of interests” regarding the project. Thompson and her husband are Lake Anne residents and own the Lake Anne Coffee House. Board President Ellen Graves asked Shannon to “be respectful” of her fellow directors.

“The fact that I own a coffee house and an apartment, I don’t believe is a conflict,” Thompson said. “I’m a community member who has an opinion about the dock.”

Thompson asked the board why they would not consider the opportunity of improving a facility when it arises, as they would with a baseball park.

Fulkerson said the issue was being brought to the board’s attention only so they could learn about the ideas on the table and determine what they want to do going forward.

“I want to be respectful of the fact that you’ve had a member request,” Fulkerson said. “We just need to know what to do next. That’s why we’re here.”

Director Ray Wedell said it was “crazy” that the board was spending so much time talking about the project at its January meeting. He said with as many as four new directors arriving in this year’s election, it would make more sense to allow the new board to make such a decision.

“This is an important project, and I’m not going to rush in and say, ‘This is going to look cool,’ and ‘Wow, wouldn’t Lake Anne look neat?'” he said. “I don’t know why we’re spending time putting an agenda together that goes till midnight on stuff we don’t have to deal with right now.”

No motion was made on advancing the project.