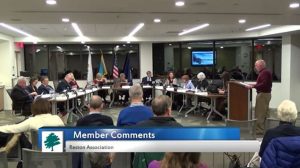 Editor’s note: Since the publication of this op-ed, Reston Now has instituted a policy of no longer publishing letters to the editor that are personal attacks against individuals.

This is an op-ed submitted by Ed Abbott, co-coordinator of Reston Recall. It does not reflect the opinions of Reston Now.

Reston Association still lacks a Code of Ethics, but we know a conflict of interest when we see one.

One of many items on a very crowded agenda at the last board meeting was a discussion of improvements to the Lake Anne docks, above and beyond the necessary repairs that are already in the budget. Mr. Thompson explained the project to the board with a very nice slideshow. He showed the board the location of the new docks and what a nice improvement they would make to the ambience of Lake Anne.

Unfortunately, neither Mr. Thompson nor Ms. Thompson, nor anyone else for that matter, volunteered the information that the presenter was the spouse of Director Eve Thompson. Nor did the Board discuss the possible conflict of interest inherent in having the husband of a board member present before the board as president of a condominium association seeking to get the RA to spend RA members’ money on a new capital spending project that would primarily benefit the property owners and businesses of Lake Anne.

A motion was introduced to hold a public hearing related to the proposed capital improvements of the docks. When Eve Thompson started to speak in favor of the motion, Director Lucinda Shannon raised the issue of Ms. Thompson’s conflict of interest. Ms. Thompson retorted that her ownership of a condo and a coffee house at Lake Anne were not conflicts.

So what are the obligations of directors when it comes to conflicts of interest (COI)? First and foremost, the COI statement must be complete and accurate, signed under penalty of being removed from the board. What does Ms. Thompson disclose about her potential conflicts? Not a whole lot. Her ownership of the Lake Anne Coffee House isn’t included. Nor is her husband’s connection to the Lake Anne of Reston Condominium Association.

Since most directors are property owners in Reston, potential conflicts of interest are inevitable when the board conducts business. The right way for the RA board to handle these issues would be for a director to disclose a potential conflict up front, before the discussion starts. The other members of the board and/or counsel can then decide if it is appropriate for the director to participate or if she should recuse herself.

The worst way for a board to conduct business is for the director to fail to disclose a potential conflict and then disagree about it when called on it by another director.

If the board is so lackadaisical in enforcing its own COI rules, what other conflicts and self-dealing has occurred or is occurring? The Tetra property purchase comes to mind. This may be the tip of the proverbial iceberg. We may never know unless we change the membership of the board.