Now, an estimated 60 of those merchants are considering a lawsuit against Boston Properties over what they see as the cause of that decline — the installation of paid parking.

Aaron Mervis, who runs RTC’s Big Bowl, is one of the organizers of the group. Mervis, who has been in restaurant management since 2000, said he has never seen anything quite like this.

“I’ve never seen the amount of customers that are upset and are just flat-out boycotting the Town Center as a whole,” Mervis said. “As for retailers, I’ve never seen the amount of different retailers grouping together. Usually, when I’m talking to other retailers, it’s seeing what we can do to help cross-market each other’s brands. Talking about protesting and lawsuits, that’s unprecedented.”

Boston Properties initiated paid parking at Reston Town Center on Jan. 3. Backlash from the community, particularly on social media, began quickly thereafter. Mervis said RTC restaurants have been gathering to fight since the paid-parking plan was first proposed by Boston Properties last year, and retailers have since joined the groundswell as well.

Mervis also runs Wildfire restaurant at Tysons Galleria, and he said the trickle-down effect of the parking controversy reaches there as well.

“People are openly talking about it at the bar, saying they are only there because their friends won’t meet them anymore in Reston, or they themselves refuse to park in Reston,” he said.

Cosmetics store Origins closed in mid-January, citing paid parking as one of the reasons. The Bike Lane also announced last month it is actively seeking relocation outside of the Town Center. 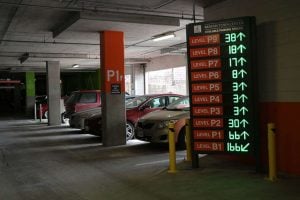 Mervis said estimates provided by Town Center merchants show a 10-50 percent decline in sales from January 2016. He said Big Bowl validates two hours’ parking for its customers, but the system doesn’t make sense from neither the business’s nor the customers’ standpoint.

“A $4 beer and $4 for parking, that doesn’t make any sense,” he said. “Our customers are appreciative that we’re doing it… but they still say they’re not coming back. They say it’s too much of a hassle.”

The merchants are planning a meeting Monday at Vapiano restaurant (1875 Explorer Street) to continue to discuss their future plans, including potential litigation. In a press release, reasons for their unrest are spelled out:

Besides being onerous, the system itself is driving people away. It includes:
— Having to download an app, which customers say is confusing, does not work well
— Pay stations are often not working and confusing
— Little or no assistance from Boston Properties and no way to explain the system to non-English speakers
— Confusion: Some retailers have provisions allowing free guest parking in one lot but not another
— Filled parking spots forcing guests to park in a different lot where a retailer may not validate (not all retailers can afford to purchase validation codes for all lots)
— Overnight charges for restaurant guests who have been drinking and want to leave their cars overnight while they walk/taxi/Uber home
— Forcing guests to park in nearby development and angering tenants
— There is no quick parking accommodation for guests to do pickups, dropoffs, etc.
— Unclear rules about weekend parking (holidays? Fridays nights?)
— Validation codes have major limitations (guests must change garages to have their ticket validated for both a movie and dinner at certain restaurants)
— Guests with disabilities without smartphones must find a pay station (not conveniently located)

There are also issues which affect the retailers:
— Negative publicity has spilled over to the retailers
— Employees are affected and are looking for other work
— All retailers are charged the same fee to validate parking (bad for small retailers)
— Employee parking is inconsistent and difficult to manage
— Parking security is not trained to help or answer questions
— Retailers are struggling to hold weekday events because people who would attend do not want to deal with paid parking
— Boston Properties has made changes without notification

“This is unbelievable, what’s happening, what they’re doing,” Mervis said. “Guests don’t want to deal with this. They just want to come in and eat.”

Rob Weinhold, spokesperson for Boston Properties, said it would be “inappropriate” for the real estate trust to speculate on or respond to the merchants’ legal threats. However, when contacted by Reston Now, he did wish to clear up “misinformation” about parking validation “that requires immediate clarification:”

“Each retailer and restaurateur, at their sole discretion, decide[s] which garages they choose to validate. As previously communicated, each retailer and restaurateur makes their own business decision about (1) participating in the validation program and (2) what validation terms they choose to incorporate within their unique business model, to include validating for all or select garages.”

Mervis said his restaurant is trying to do the right thing for customers by validating parking, but the end result is hurting their bottom line.

“We’re paying the same price as the guest pays,” he said. “We spent $1,600 in January to validate parking, and at our price point, that has drastic effects for us.”

More Stories
Op-Ed: Conflict of Interests May Just Be Tip of the IcebergNominations Open for Reston Association Volunteer Service Awards