Many Reston residents turned out Thursday afternoon to give their two cents to the forensic accounting firm tasked with analyzing the cost overruns associated with Reston Association’s purchase of the Tetra/Lake House facility.

Deirdre Flaherty, partner and co-founder of the StoneTurn Group, joined RA Vice President Michael Sanio and Eric Carr, chair of RA’s Tetra Review Committee, on a panel to hear statements from Reston citizens. StoneTurn has been contracted by the Reston Association Board of Directors at a cost not to exceed $45,000 to conduct their review by the end of February.

The forum was structured loosely, with members provided three minutes to take the podium and speak individually, or five minutes to speak on behalf of a group. It broke down into informal conversation throughout, however, as residents asked questions from the audience and demanded answers regarding what exactly the firm is planning to find — and how those findings will be presented.

“The intention is to make the report public when it is finished,” Sanio said when pressed about how the findings would be shared with the community. “That’s why we have the consultant doing the work.”

Many residents shared their skepticism about the transparency of the review process, though. 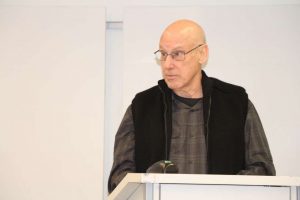 “It is vitally important… that your final report is published, unaltered and unredacted,” said Dick Stillson, who was a member of the MediaWorld group that had offered to do the work for a fee of $1. Negotiations ended, Stillson said, in part over RA’s requirement that findings be confidential. “There is no way that the community will have confidence in the work that you’ve done, or in fact that the board really did ask for an independent review of the Tetra purchase, if that report is not published in its complete form and made available to the community.”

RA members voted in a referendum in May 2015 to allow the association to purchase the Tetra property for $2.6 million — a cost more than double its tax assessment. Renovations made on the property, which were expected to cost $259,000, ended up costing nearly three times that. RA has since opened the renovated facility as The Lake House.

The goal of the review, according to Reston Association, is to “identify areas for process improvement, potential changes to internal controls and/or modification to governance procedures to help ensure situations like the Lake House cost overrun can be avoided in the future.” Sanio said the goal is twofold: to determine what transpired during the Tetra purchase and to make sure something similar doesn’t happen again.

Several residents at the meeting inquired why the StoneTurn contract was not made available on the Reston Association website for public review; the 13-page document was later added to the site.

Flaherty told residents she is extremely confident the review will be completed to its scope and within the time frame allotted. Some residents, though, questioned how intricacies of the matter including culpability, conflicts of interest and potential law-breaking would be handled.

“The scope of our work isn’t to do that right now,” Flaherty said. “[But] whatever we see will be divulged.”

While Flaherty said it is not the reviewer’s responsibility to go to the authorities with any evidence of illegal activity, both Sanio and Carr said they would do so if necessary.

Terry Maynard, of the Reston 20/20 Committee, said a “vigorous investigation” is needed to get to the bottom of “the greatest leadership crisis in the history of the Reston Association.”

“Never have so many people in Reston’s leadership on the RA Board of Directors and among its senior staff behaved so unethically if not outright illegally,” Maynard said. “[They have] demonstrated such complete incompetence in analyzing and managing the finances of a single RA project, and used secrecy behind a legal facade to protect the guilty while so neglecting the interests of the community.”

Sanio said members of the RA board have endured a lot of negativity from the community throughout the process.

“I’ve heard lots of accusations, I’ve read accusations, some of them unfounded, and I think for those that serve on the board as volunteers, you’ve put those individuals that commit untold hours in your service into a very, very difficult position,” he said. “I would urge you to reflect on that. These are your peers in the community, and they’ve stepped forward to be helpful. … I think that those that have stepped forward deserve the respect.” 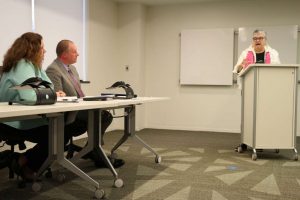 Sanio said he is confident StoneTurn’s work will provide what RA has been looking for regarding closure on the Tetra purchase.

“We too are looking for answers as well, and I’m confident with the competency of the StoneTurn group and Dee (Flaherty) here, that we’ll get what we need,” he said.

But Dennis Hays, of the Reston Citizens Association board, said the meeting didn’t clear up many of the issues people have about the process. In fact, he said, the opposite occurred.

“I’m more concerned now at the end of this meeting than I was in the beginning,” he said. “If we get a report that just says, ‘Here’s what we need to do in the future,’ then we have wasted $45,000.”

Anyone with comments to share who was unable to attend Thursday’s community session is encouraged to email [email protected].

more stories
Previous
Finalists Announced for 2017 Best of Reston Awards
Next
In the Design Studio: The ABCs of Kitchen Cabinets, Part 1