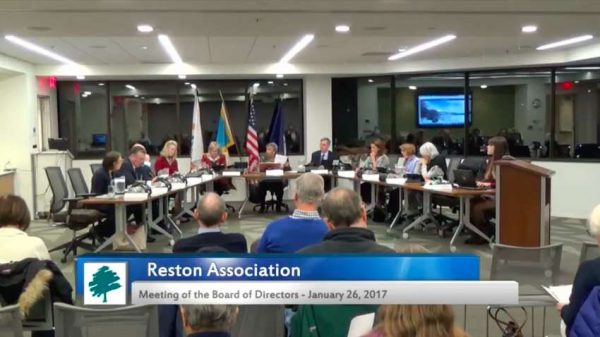 The Reston Association Board of Directors has agreed to a $45,000 independent review of its Lake House project, to be conducted by the StoneTurn Group. Terms of the review require the work to be completed by Feb. 28.

According to information provided by the Reston Association board about the deal:

StoneTurn was one of the original finalists chosen by the Tetra Review Committee to conduct the impartial study. After a local company, Mediaworld Ventures LLC, terminated contract negotiations with the Reston Association earlier this month, the board moved to enter into negotiations with StoneTurn immediately during its regular monthly meeting Thursday.

Several concerned residents addressed the board Thursday evening, following the announcement by Vice President Michael Sanio, to share their thoughts about the ongoing saga. Karen Wilkens, of Waterview Cluster, said she is frustrated about what she sees as continued overspending on the project.

“I’ve lost a lot of faith in Reston Association, and I’m stunned to hear that you’re contemplating signing a contract that would spend an additional $45,000 on that property,” she said. “The amount of money that was overspent, it’s gross negligence.”

The Lake House property was purchased from Tetra in 2015, for a cost nearly double its tax assessment. Renovations on the property to transform it into a community building have cost three times more than expected. An independent audit was requested.

Mediaworld Ventures LLC came together and announced they would do the work for a $1 fee. After months of negotiations with the RA board over the details, that proposal fell through with finger-pointing from both sides.

Reston resident Jill Gallagher, a management consultant and former budget analyst, was a member of the Mediaworld committee. She addressed the board Thursday night and expressed her sorrow over the fact that the hard work the committee did was, they view, stonewalled by the RA board.

“I was very disappointed that we didn’t get the contract,” Gallagher said. “We had worked very hard from August until the end to try to understand what happened.”

Gallagher provided board members, for the record, with the assessment the committee had drawn up regarding the meeting at which the board voted on a referendum to purchase the property.

“We had many, many questions, including a two-hour executive session that occurred before the project was even presented. To members, it looks like a lot of the decisions were made before you even heard about the project,” Gallagher said. “A lot of things happened at that meeting that your members are not aware of. I think that is the source of this problem.”

Ed Abbott, representing Reston Recall, provided the board with a report on what his group — which has the expressed goal of having board members involved in the Tetra/Lake House purchase removed — has analyzed about the deal.

“The only way Reston gets back to its purpose as defined in the deed, articles of incorporation and bylaws, is to elect a board with a majority of members who will undertake a thorough evaluation of RA’s organization including but not limited to the senior staff leadership team,” Abbott said. “Reston Recall will be reaching out to the candidates in the upcoming election and supporting those that agree.”

Concerns about the quality of the board’s minutes were also brought up during the meeting — first by a director, Sherri Hebert, who questioned the report from a Dec. 7 special meeting with the Mediaworld committee.

“[The minutes] lacked any substance, meaning there was nothing in the minutes that even talked about why the meeting was happening, nor what some of the major concerns were within the discussions,” Hebert said. “I’d like to see the minutes be added to… to add some of that context to the minutes. Minutes should be written so that if we want to reflect on them at some future time, we know what happened.”

Board Secretary Eve Thompson said the board’s standard for minute-taking is not to try to capture the dialogue, but rather just to capture topics and decisions.

The Dec. 7 meeting was also not video recorded and placed on YouTube, as regular meetings are.

The board eventually agreed to re-assess the minutes from the Dec. 7 and Dec. 13 meetings and bring them back for approval at February’s meeting.

Citizens who spoke later in the meeting also expressed their feelings about what they see as bare-bones minutes. Resident James Dean said given controversial actions such as the Lake House purchase, residents deserve more from the board’s meeting reports.

“It may be usual for you to just record votes and actions,” Dean said. “[But] your membership wants more information from you than just a recording of your actions and your votes.”

The next meeting of the Reston Association Board of Directors is scheduled for Thursday, Feb. 23.