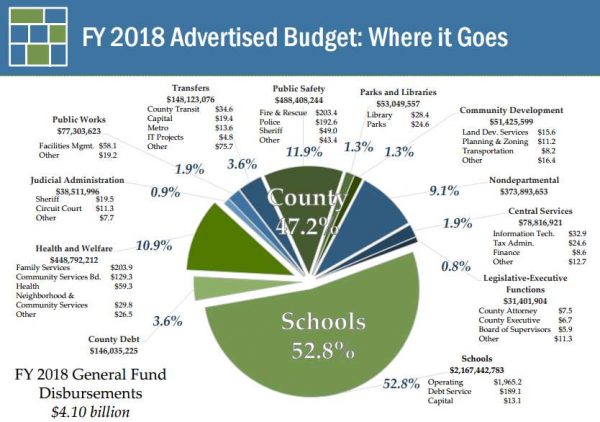 Residents of the Hunter Mill District will have their chance on March 4 to weigh in on the proposed Fairfax County FY2018 budget.

County Executive Edward Long presented the $4.1 billion proposal to the county Board of Supervisors at their Tuesday meeting. Each supervisor is holding local meetings to get community input on its details.

Hunter Mill Supervisor Cathy Hudgins will hold her summit Saturday, March 4 from 8:30 a.m. to noon at the Frying Pan Farm Park visitor center (2739 West Ox Road, Herndon). In addition to the budget presentation and a speaker, the event will also include a “build-a-budget” workshop that Hudgins said would help residents understand what has to be done with the funds available.

In her response to Long’s proposal to the board Tuesday, Hudgins said the state has made it difficult for Fairfax County to “control [its] own destiny.”

“It is troubling when we have to return our value to the state in the way that we do,” Hudgins said. “When you think about that, it is daunting to have our citizens look to us and think that we actually do control it, and we don’t.”

Hudgins said a lack of diversity of revenue for the county, caused by an “inability to break through the stronghold that is in the general assembly,” is forcing some residents to be priced out.

“The cost of living here, it does increase, and many of those seniors that I talked with at a senior group [Monday] are saying, ‘I have to move if I want to stay in a place that is affordable for me,'” she said. “We are going to have a lot of discussion from people on that conversation.”

Following their community meetings, supervisors plan to present their changes to the executive’s recommendations on April 25. The budget is scheduled to be adopted May 2.

Hudgins will be joined at the March 4 budget session by Board of Supervisors Chairman Sharon Bulova and Vienna Mayor Laurie DiRocco. Residents interested in attending are asked to RSVP to [email protected].