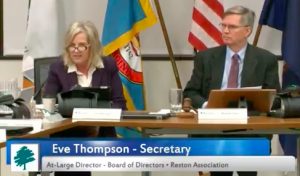 A complaint from a community member asking for a director to be removed from the Reston Association board was the source of lengthy debate during the board’s Thursday meeting.

Ed Abbott filed a Common Interest Community Board Complaint against At-Large Director Eve Thompson on Feb. 4. In his complaint, Abbott pointed out that Thompson’s Conflict of Interest form on record does not disclose her ownership of the Lake Anne Coffee House and Wine Bar, as well as her husband’s status as president of the Lake Anne of Reston Condominium Association. Because of this, he said, Thompson’s actions during the board’s Jan. 22 meeting — where her husband presented on Lake Anne capital improvements and she spoke in favor of them — were imprudent.

Board general counsel Ken Chadwick said he did not believe there was any violation of COI policy because no action was taken on the subject at the meeting. He cited Virginia law in adding that even if it wanted to, the board does not have authority to remove Thompson, as Abbott requested.

Chadwick recommended to the board that they vote to deny Abbott’s complaint, at which time he would be able to take it to the Virginia state ombudsman for further review. That motion was made, but it failed after directors Lucinda Shannon and Sherri Hebert voted against it. Shannon said she wanted the board to go against Chadwick’s recommendation and ask Thompson to resign.

Shannon said that as Thompson checked a box on her COI statement saying falsifying information would result in resignation from the board, that is what should happen.

“If we don’t follow what we say we’re going to do in writing on our policy documents that we sign, then what good is our word?” Shannon said.

A vote on Shannon’s motion to ask Thompson to resign also failed, with Shannon casting the only assenting vote.

In response to the discussion on the matter, Thompson said it was never her intent to deceive anyone.

“This is so dismaying, not to be called out on incomplete documentation, but to have that used to basically be accused of integrity issues,” she said. “I most definitely, last month at the board meeting, should have re-disclosed — I have disclosed it before — my interests in Lake Anne. It’s been so well-documented that it’s always a surprise to me [that people don’t know]. … That doesn’t mean that I’m excluded from filling out the paperwork completely, and for that I do apologize. I should have been more careful.”

Thompson’s ownership of the coffee house along with her husband was reported in the media, including on Reston Now.

Director Ray Wedell said he is concerned that directors will begin to take a “defensive mentality” when they face continued attacks from the community.

“We need to be proactive, we need to take more chances, we need to address community issues without fear of somebody coming behind us with all sorts of ‘You did this, and I want you fired, and you’re a terrible person,'” he said. “Everybody in here lives in glass houses, everybody in here has flaws.”

Thompson said she is discouraged that discussion on a proposal that would be beneficial to all the residents of Lake Anne devolved into personal attacks against her.

“Instead of, ‘Wow, here’s an opportunity to do something awesome in the community that would benefit the entire community,’ it became a personal vendetta,” she said. “That’s really tragic [and] I feel really badly about that.”