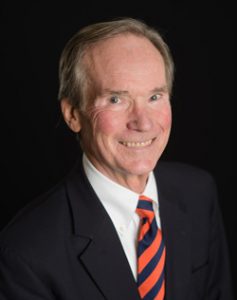 Voting in the 2017 Reston Association Board of Directors election begins today and will run through April 3. We will be posting profiles on each of the candidates. Today, we feature David Bobzien, who is unopposed in the race for Apartment Owners’ representative. Profiles of candidates in the three contested races will run following those races’ candidate forums, which are scheduled for later this week.

The profiles are in a Q-and-A format so each candidate has an opportunity to answer the same questions in their own words.

I moved to Reston on March 1, 1975, upon finishing active duty as an Army JAG officer. I had accepted an offer from a Fairfax law firm and needed close-by housing for me, my wife Cathy, and our 3-year-old son. Reston was very new, and it offered a variety of housing that would enable our family to make Reston our “forever” home. Being the son of an Army officer and having attended eight schools in 12 years, we wanted to put down roots, and Reston was perfect for fulfilling that desire. We purchased a townhouse in Pinecrest Cluster and moved to our current house in early 1980.

Since my early days in Reston, I have been active in the community, and in 1989, the Board of Supervisors, at the request of Martha Pennino, appointed me to the Planning Commission to represent what is now the Hunter Mill District. I served on the Planning Commission until I was appointed County Attorney in January 1993. My retirement in July has given me the opportunity to get back to my involvement in Reston. While County Attorney, I represented the Board of Supervisors and the Redevelopment and Housing Authority, which between them own 16 percent of the apartment units in Reston. I now seek to represent them, the other apartment owners and their tenants in a new capacity, that of apartment owners’ representative on the RA Board.

What are the three biggest concerns you have for Reston?

My three biggest concerns are:

1. Maintaining and refurbishing RA’s pools, tennis courts, trails, lakes, and open space and “right sizing” only if community needs can continue to be met;
2. Ensuring that development protects Reston’s open space and is largely confined to transit-oriented locations; and
3. Providing additional recreational facilities only when they are supported by a strong business case that takes into account the existing financial burden on RA members.

I hope to give voice to the needs of the apartment owners and their tenants and to do so in a respectful, civil manner. I also hope to use my experience as a long-time Reston resident and a land use practitioner in navigating the many land use matters in which the RA has become increasingly involved.

During my four years as Reston’s planning commissioner and over 23 years as County Attorney, I have been intimately involved in Reston’s development. (My office took the lead in thwarting the recent effort to develop the Reston National Golf Course.) I will bring that experience and expertise to the position.

Read more about Bobzien and the other candidates in the 2017 Reston Association election on RA’s website.