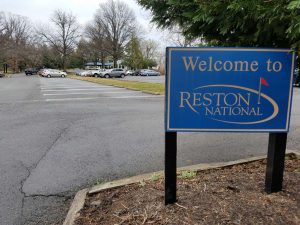 Reston National Golf Course has been advertised for potential redevelopment, but a lot would need to happen for that to take place, Fairfax County Supervisor Cathy Hudgins is reminding constituents.

In a statement to media Monday morning, Hudgins said an interpretation of the property’s status made by Fairfax County’s Department of Planning and Zoning is “clear and concise.”

“According to the interpretation, the process is clear and concise and must be followed in order for development other than a golf course or open space to be considered for the property,” Hudgins said.

The interpretation of the golf course property by Fairfax County Planning and Zoning reads:

“Based on the previous approvals, the redevelopment of the property from a golf course to residential uses would first require an amendment to the Reston Master Plan which is part of the Fairfax County Comprehensive Plan, as well as obtaining both Development Plan Amendment approval and Planned Residential Community Plan approval from the Board of Supervisors.”

According to Hudgins’ office, the supervisor made the statement Monday in response to the recent advertisement of the property by developer ARA Newmark as well as a recent article on real-estate news site GlobeSt, which quoted specific rumored sale prices and development values for the property. Hudgins believes the characterization of the property as a “by-right, mixed-use development opportunity” could be misleading to some residents, who may believe its redevelopment to be “a done deal,” her office stated.

Activist group Rescue Reston, which fought against a previous attempt to redevelop the property, has stated it will “mobilize [its] allies and supporters as necessary to oppose any attempt to amend the Comprehensive Plan that would threaten our open space.”