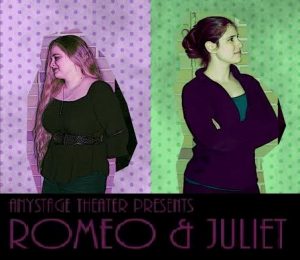 When “Romeo and Juliet” was first performed in the 1600s, all-male casts were used — women were not permitted on stage.

Next month in Reston, the script will be flipped.

DC troupe AnyStage Theater Company, which first brought Shakespeare to Reston with “Hamlet” in 2015, will return May 6-7 to stage an all-female version of the classic love story. Three stagings of the outdoor production are slated for Lake Anne Recreation Area (11301 North Shore Drive). A cast of seven women will portray 12 roles in the minimal-scenery show, which will also feature 21st-century costumes and music.

The show (trailer available on YouTube) is directed by Aria Velz and John-Nicholas Walsh.

“One of the best parts of having an all-female cast is talking about masculinity and femininity in the play,” Velz said in a news release. “Having a room full of women talk about not only womanhood but our perspective of manhood makes for insightful and hilarious moments while staging, particularly in the scenes with only male characters.”

“One of my favorite aspects is the energy and enthusiasm from everyone in the cast getting to tackle roles we wouldn’t otherwise have the opportunity to play,” she said of the show.

“Juliet is often seen as sort of a half-person, defined by being in a pair with Romeo rather than as an actual character,” Koch said. “This production really highlights that Juliet is much more complex than she gets credit for. We can see the strength of her character in her refusal to follow along quietly.”

Velz says she hopes the show reaches the audience in a specific way.

“We’re hoping audiences really see how the masculinity and braggadocio that boys and men display can be ridiculous,” she said.

The performances will be Saturday, May 6 at 2 p.m.; and at both 2 and 6 p.m. on Sunday, May 7. Performances are free but donations are welcome.