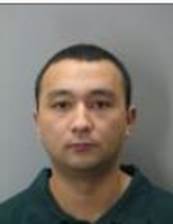 The man Fairfax County police say struck a 75-year-old woman twice with his car, killing her, is from Reston.

Kenan M. Ozcan, 31, was arrested Friday afternoon on Fair Ridge Drive in Fairfax after police say he assaulted a woman in a parking lot. Investigating officers noticed front-end damage to his vehicle and connected him with the death of 75-year-old Maria Ascencio earlier that morning.

Ozcan has thus far been charged with felony hit and run for his role in Ascencio’s death, as well as with attempted robbery for the parking-lot altercation.

Ozcan is listed in a Friday media release from FCPD as being from Fairfax. Don Gotthardt of FCPD, however, tells Reston Now that the department’s management system lists Ozcan’s address as being in the 2200 block of Castle Rock Square in Reston. That may be a relative’s address, Gotthardt said, but no Fairfax address for Ozcan exists in the system.

Records on file with the State Corporation Commission show a taxi company, Capital Flyer Transport and Taxi, was once registered to Kenan M. Ozcan from the Reston address. All reviews of the business on Yelp gave it 1 star, including one that claims a driver named Kenan “flipped his lid” and “began yelling and spewing profanity” at customers, with the reviewer calling him a “mentally unstable, dangerous person.”

A LinkedIn page in Ozcan’s name lists him as a molecular biologist with a bachelor’s degree from Virginia Tech and a master’s degree from George Mason. A GoFundMe page apparently set up by Ozcan in February asks people to help him turn his life around.

“Im a Virginia Tech Graduate, and I have my Masters in Biology, however I have been going thru some tough times recenetly and I am an ex-felon, I thought going to school would change my life and I could really use any support to help my life, I really appreciate it.” [sic]

In 2014, Ozcan was jailed after being found guilty of grand larceny following multiple armed robberies in Herndon. He was given a six-year sentence; however, all but 2 1/2 years was suspended.