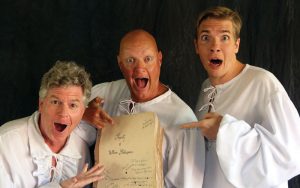 Just when you thought knew every story Shakespeare had to offer, this show comes along.

“We are totally not completely making this up,” they say in promotional material.

Typical to other Shakespearean works, the troupe says, the play contains “occasional bawdy language and mild innuendo.” With that in mind, the shows are rated PG-13 — “Pretty Good If You’re 13,” they say.

Tickets to the performance are $25 for Reston residents and $50 for non-residents. For more information, visit the Reston Community Center website.