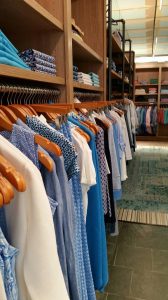 The new store, which was first announced around two months ago, is located at the former site of Origins at 11932 Market St.

The new Reston location is the fifth location in Virginia, and the 177th nationwide.

The spacious, 1,100-square-foot store is known for its bright, marine-inspired color palette, with a lot of blues and greens, accented by bamboo furniture and decor, which reps say is in good timing as locals start to get excited about summery wardrobes and spending time outdoors.

Reston Town Center proudly posted the photo above from inside the new J. McLaughlin store on Facebook last week, showing off racks of the classic, brightly-colored and patterned clothing.

Originally started by two brothers, Kevin and Jay McLaughlin, the retailer says they look forward to being “good neighbors” and getting active in the local community.