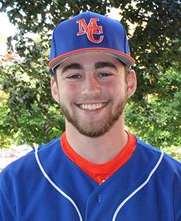 Up in Minnesota, the Macalester College Scots are heading to their first NCAA Division III baseball championship tournament, thanks in large part to a local player.

The Scots are going to the tournament after winning the Minnesota Intercollegiate Athletic Conference championship Saturday. Jared Abelson, a 2015 graduate of South Lakes High School, started the title game with a leadoff single and scored on a hit by the next batter, setting the pace in a 13-5 win over Bethel University. Abelson ended the game 2-for-5 with an RBI, and he ended the three-game playoff tournament with a .500 batting average.

The sophomore’s playoff performance was no fluke. Abelson, who plays center field and catcher, finished the MIAC season sixth in the conference in batting average (.371), hits (53), runs scored (35) and on-base percentage (.451).

In 2014, Abelson told the South Lakes Sentinel why he loves playing baseball.

“It’s all about overcoming obstacles. The beauty in baseball is that you don’t have to be 6’5″ to be the best player. Anyone can be great; you just have to be the hardest working guy, especially in the offseason.”

According to his profile on the Macalester College Athletics website, Abelson is 5 foot 9.

Abelson and the Scots start the 56-team tournament Thursday night in Whitewater, Wisconsin, with a game against Concordia University Chicago.