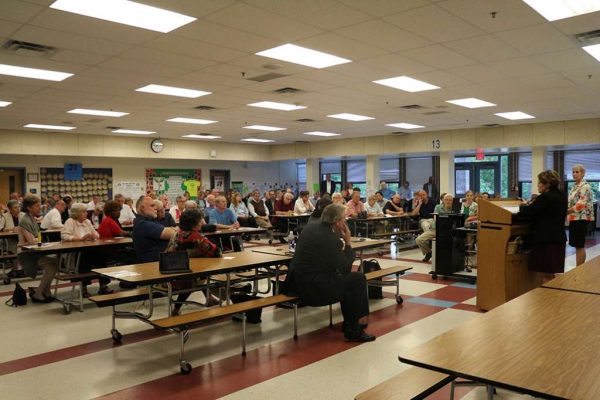 The future status of the Reston Regional Library was frequently brought up by attendees of a community meeting Wednesday regarding Fairfax County’s plans for the Reston Town Center North development.

Project coordinator Joan Beacham, of the county’s Department of Public Works and Environmental Services, said both the library and the Embry Rucker Shelter will be demolished to make room for the first stage of development. DPWES hopes that construction on the project will begin in 2022.

“We want to make sure everyone understands this is a long-term development,” she said. “Things aren’t going to happen right away.”

What is planned to happen when work does begin, Beacham said, is the transfer of the library and the shelter into temporary facilities. The temporary library, she said, would top out at 6,000 square feet — a figure that caused great concern to residents, as the current library is about five times that size. 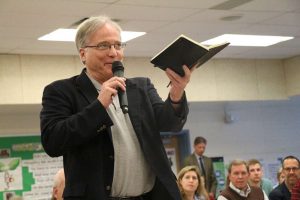 “The Reston library has over 1,000 people a day that go to it,” said Dennis Hays. “We’re talking about 1,000 Restonians a day who will not have a [full-sized] library to go to for an indeterminate amount of time.”

Hays and other residents suggested the Request for Proposals for development ask applicants to commit to building the new facilities before demolishing the existing ones. The new library, Beacham said, is planned to be 39,000 square feet and exist on the first one or two floors of a new high rise at the same location. The new shelter, planned to be more than twice the size of the current one, is proposed for a similar “urban form” layout. 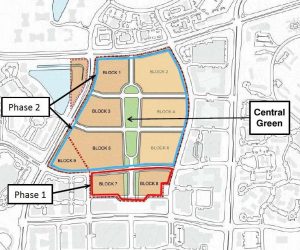 In the redevelopment, the 50-acre area — bounded by Baron Cameron Avenue, Town Center Parkway, New Dominion Parkway and Fountain Drive — would be realigned into nine parcels, which would then be rezoned into urban blocks. The first two parcels slated for redevelopment are Blocks 7 and 8, which include the library and the shelter.

“We feel in order to move forward with 7 and 8, temporary facilities will be required,” Beacham said. “This is the way that public facilities are repaired and replaced all over the county — it’s not just a situation with Reston.”

Both Beacham and Supervisor Cathy Hudgins said replacing the library and shelter is a priority of the project, as they are outdated facilities in need of additional capacity.

In total, Blocks 7 and 8 are planned to include:

Future plans for other blocks in RTC North include the development of a 90,000-square foot recreation center by the Fairfax County Park Authority, replacement of the North County Human Services Center, and a 6-acre central green space among 10 total acres of open space. Redevelopment of the whole area is expected to take more than a decade.

Residents who attended Wednesday night’s meeting also challenged county staff on promoting a population increase through the project without addressing needed amenities such as additional schools, fire stations and parks. Many who spoke on the subject have brought up the same issues during community meetings regarding the county Department of Planning and Zoning’s proposal to increase the overall population density in Reston’s Planned Residential Community (PRC) District. 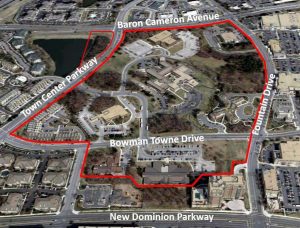 In response to the concerns about schools, Beacham said developers are required to donate $12,000 per projected new student to Fairfax County Public Schools. That money is turned over to the school board’s capital improvements fund.

“The school board can use that money however they want, as far as their Capital Improvement Program,” she said. “Fairfax County Schools tracks population, they’re aware of this development.”

Gayle Hooper, landscape architect for the Fairfax County Park Authority, told citizens that there is a “broader plan” for new parks in the area. The Comprehensive Plan calls for three new athletic fields to be constructed in Reston’s TSAs.

“There is a need for more fields than that, but [the Plan] points out the potential that those fields should be specifically in those locations,” she said. “Developers, when they come in, have a requirement to meet that need. In Reston, they have a prescribed dollar amount per square footage of development they need to pay that will go toward athletic field construction or improvement to existing fields.”

Hooper said there is a plan to expand fields at Baron Cameron Park and add lighting and synthetic turf, which “greatly expands the amount of play you can get throughout the season and within the hours of the day.”

Reston resident Tammi Petrine, though, said there is a lack of land within the corridor to construct new schools or to provide parks that are walkable for urban residents.

“I go to Reston [Planning & Zoning committee] and I see the applications that come through, and every one of them passes the buck — ‘No, we’re not providing a field, we have 34 acres but we’re building curb to curb,'” she said. “This is what we’re getting. It’s reality versus theory.”

The presentation from Wednesday evening’s meeting is available on the DPWES website. Beacham said anyone interested in submitting further comments about the plan can email [email protected] within the next week.