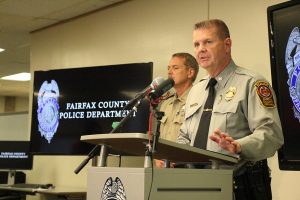 At a press conference Monday evening, representatives of the Fairfax County Police Department continued to fight rumors that Nabra Hassanen was killed because she was Muslim. Instead, they said, she was killed because of the quickly escalating temper of the assailant, who police say is 22-year-old Darwin Martinez Torres of Sterling.

Police confirmed Monday evening that a body found in a Sterling pond Sunday afternoon is Nabra. They say she was part of a large group of teenagers walking and biking back on Dranesville Road, toward the All Dulles Area Muslim Society, from McDonald’s at about 3:40 a.m. Sunday when the altercation began.

“Torres drove up to this group, and a male teen who was on a bike began arguing with Torres,” said Julie Parker, director of FCPD’s media relations bureau. “At that point, the group scattered. Witnesses say that Torres caught up with the group a short time later in a nearby parking lot and got out of his car armed with a baseball bat.”

The suspect began chasing the group of about 15 teens, Parker said, and Nabra was the one he caught. Police said they do not yet know why the suspect was so enraged, but that there is no indication that he had any particular bias against Muslims.

“His anger over that earlier encounter led to violence when he hit Nabra with the baseball bat,” Parker said. “Torres then took Nabra with him in his car to a second location nearby, in Loudoun County.”

Lt. Bryan Holland of FCPD’s Criminal Investigation Unit said that Nabra was assaulted a second time in Loudoun County before the suspect dumped her body and returned to the area of the altercation, where his car was identified by a patrolling officer and he was arrested at about 5:15 a.m.

Police believe the suspect acted alone, and they are not searching for any others. Torres is being held without bond.

Both FCPD and Fairfax County Board of Supervisors Chairman Sharon Bulova said they stand with the Muslim community as some live in fear, despite police statements that no religious or ethnic bias was at play in this case.

“Law enforcement will not know for sure until all of the facts are uncovered in this case, and it is still an ongoing investigation,” Bulova said. “While the police work to uncover the motive, the fact remains that any violent murder is a senseless and hateful act.”

The case may be prosecuted in Loudoun County if the continued investigation merits such a move, police said.