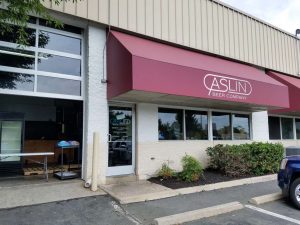 Tremendous growth threatened Aslin Beer Company‘s future in Herndon, but it has found a new home that will allow it to stay.

Kai Leszkowicz, one of Aslin’s co-founders, said they hope to get the new space opened by December, and plan to be open seven days a week.

“It’s basically a project that we started two years ago and have been following through, and now it’s coming to fruition,” Leszkowicz said.

In December 2016, Aslin said that it would be forced to leave the Town of Herndon due to the limitations of its current space at 257 Sunset Park Drive. That location now only offers beer in a “to-go” format, with a handful of new releases dropping each Thursday and sold by the four-pack. For example, today at 3 p.m. it will be offering sales of its Cortes & His Men IPA, Laser Raptors double IPA, How Now Brown Cow milk stout and There Gose The Diet gose.

Mayor Lisa Merkel said that the need to limit operations at the Sunset Park Drive location was due to a ruling by the county’s fire marshal, which occurred because of Aslin’s “incredible success that has resulted in … outgrowing their current location much more quickly than anticipated.”

“Aslin Beer Company is exactly the kind of business Herndon would like to continue to attract,” Merkel said at the time.

Anne Papa Curtis, communications officer for the Town of Herndon, said Thursday that the Town “is excited to welcome Aslin Beer Company into the downtown, and we are working with them to complete town zoning approval processes.”

In a Facebook post earlier this week, the brewery said the new space on Elden Street will “provide a unique environment that encompasses our brand and represents our team.”

Good afternoon everyone! Aslin Beer Co. and its team has been through a lot through the first half of 2017. We have…

Aslin will be holding its second anniversary party Saturday, Sept. 16 in the parking lot of the future tasting room, according to the Facebook post. It plans to keep its current space for production only, it says, while also looking for a new production facility.