Anywhere you looked in Reston and Herndon this afternoon, there were people wearing special glasses and looking into the sun as the first nationwide solar eclipse in decades passed over.

In our area, about 82 percent of the sun was blocked out at the event’s peak, around 2:42 p.m. Monday. Gathering spots across the area were filled with people enjoying the rare celestial event.

At Herndon High School, community members began lining up at 8 a.m. to get a free pair of eclipse-viewing safety glasses. The line wound around the school campus by the time their official eclipse party began at noon, and Principal Liz Noto said the 1,000 glasses the school had been given by Goddard Space Flight Center were gone by about 12:20.

“I did not realize how many people would be in need of glasses,” Noto said. “I thought we’d have extra.”

Those who were lucky enough to get glasses staked places on the school’s lawns and watched the moon pass in front of the sun. Ann Erickson, of Reston, said she remembered seeing an eclipse when she was a little girl in Arkansas, but that was “long ago.” 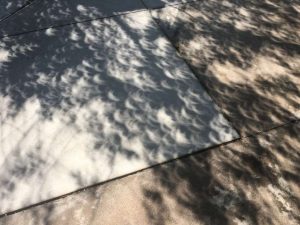 “If the clouds would go away, that would be nice,” Erickson said as she and her friends sat outside the school. “We just decided we’d all come and see it together, and it will be fun.”

At Reston Town Center, buildings emptied as hundreds of people gathered in common places to watch the show. Jorge Sanchez, of Sterling, and his wife, Melissa, were in Town Square Park wearing special eclipse-themed T-shirts.

Several dozen employees from Appian were in Town Square Park, laughing and watching the eclipse through not just glasses, but through a colander and pinhole projectors made from shoeboxes and cereal boxes, among other means. Lang Ly, Appian’s senior vice president of strategy, said the crew had been readying themselves for the outing for quite a while.

“It’s a company team-building event. Last Wednesday, we got together and did a little ‘brown bag’ to create little solar-eclipse viewers,” Ly said. “We had a lot of fun. We’re a bunch of geeks.”

The next solar eclipse to pass across the United States will take place April 8, 2024. Reston will be at about 90 percent totality for that event.