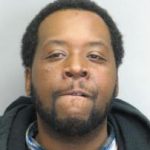 A Reston man was arrested Thursday evening after police say he initiated a robbery after asking for money — the second time in 2017 he has been charged in such an incident.

Akeem Wauran Gale, 40, was arrested Thursday at about 9 p.m. after allegedly attempting to rob a man in the parking lot of Hunters Woods Village Center. According to a report from the Fairfax County Police Department:

The victim was getting food at a nearby restaurant when a man walked up to him and asked for money. The victim refused to give him money and went into the restaurant where [the] man followed him and again asked for money until the victim left. Once in the parking lot, the suspect then grabbed the victim and tried to steal his jewelry. A Good Samaritan came to help the victim and was punched by the suspect, who then left the area. Officers located the suspect, 40-year-old Akeem Wauran Gale of Reston, and placed him under arrest, then took him to the Adult Detention Center.

In January, Gale was charged after a similar incident at the Sunoco in the 2100 block of Centreville Road in Herndon. In that case, which took place on the afternoon of Jan. 5, FCPD said:

A 44-year-old woman was pumping gas when a man approached her and demanded money. When she declined, he grabbed her in a bear hug. She continued to decline his demands and she was able to break free and run to a local store where she summoned police. Akeem Gale, 39, of Reston was arrested, charged with assault, and taken to the Adult Detention Center.

According to Fairfax County General District Court records, Gale is scheduled to appear before a judge on Sept. 13 to answer to an assault charge; on Oct. 11 to answer to obstruction and trespassing charges; and on Oct. 31 to answer to charges of petit larceny and violating terms of bond.

END_OF_DOCUMENT_TOKEN_TO_BE_REPLACED

More Stories
Herndon High School Teacher Releases Memoir About 32 Years in the ClassroomWhat’s Going On Around Reston This Weekend?